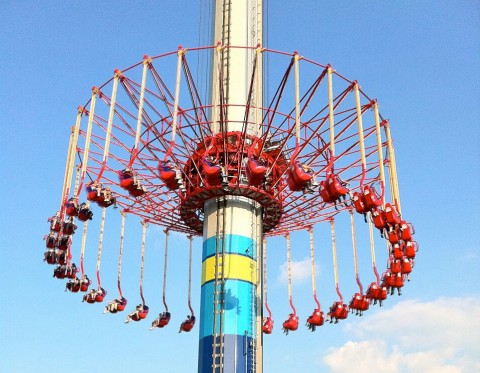 It's all in the details at Kings Island for 2011. In lieu of the familiar “build them and they will come” rollercoaster philosophy that the park's parent company Cedar Fair has become known for, Kings Island’s 2011 wish list seemed to include subtlety, detail, improvements on theme, and one very, very large family thrill ride.

And while general park improvements, "edutainment", and two very large blasts from the past might not carry the same marketing force as the park’s recent addition Diamondback or the famous Beast, this year’s additions are just as important. 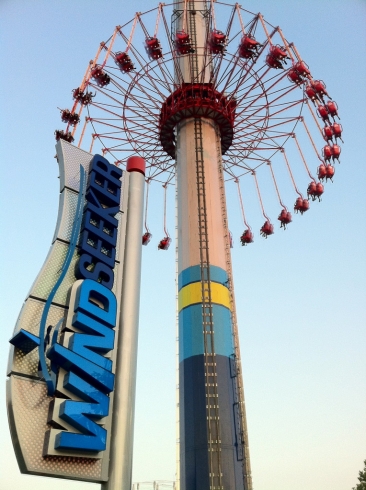 There’s very little question which of the park’s additions is the centerpiece of the 2011 season. During mid-August, 2010 with little fanfare or hoopla, Kings Island began hinting at a new addition. With hardly a week to speculate, the park announced on August 24 that, like its northern sister parks Cedar Point and Canada’s Wonderland, it would open a 301-foot-tall WindSeeker swing ride. The prototype ride built by Dutch manufacturer Mondial seems to have chosen due to its metal arms, theoretically capable of reaching greater heights (and being subjected to greater wind speeds) than its chain-armed alternatives, like Funtime’s StarFlyer.

But a prototype is not without its kinks. Like ride at its sister parks, Kings Island's WindSeeker was subject to lengthy delays in opening credited to the particularly wet and soggy spring season. And while no word has been spoken from the park, speculation is that it was more than the rain keeping the massive ride grounded, as numerous additions to the tower (including hydraulic dampers on the arms and a chain protector) were added before opening. Extensive work continued on the towers at all three parks until finally, on June 21st (nearly two months after its announced opening), WindSeeker offered its first rides to the public. 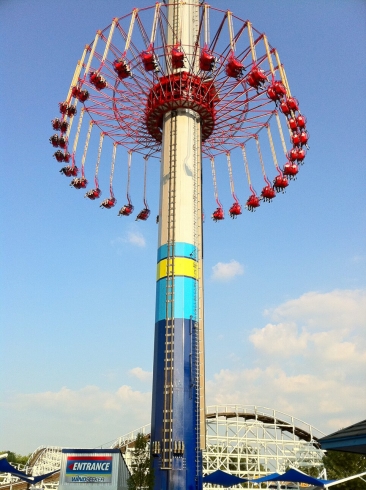 WindSeeker is no average "chair-o-plane" ride.

Rising 301 feet above the park, the massive WindSeeker is a dizzying force to be reckoned with. And despite the turbulence surrounding its opening, the swing ride seems to have finally hit smooth sailing. While Kings Island’s WindSeeker can’t offer the stunning lake views of its beachfront sister at Cedar Point, Kings Island’s tower does have a few tricks up its sleeves.

The tower is positioned at the far end of the park’s Coney Mall, an area anchored by the historic Racer rollercoaster. The midway is a massive tribute to the old, carnival-style Coney Island amusement park, with games, flashing incandescent bulbs, gardens, and classic flat rides like the Scrambler, the Monster and the Zephyr (a chair-o-planes attraction, which was actually the inspiration for Cedar Point’s WindSeeker). WindSeeker is, in some ways, a memorial to that classic, just-for-fun attraction, and also a new-age technological marvel. 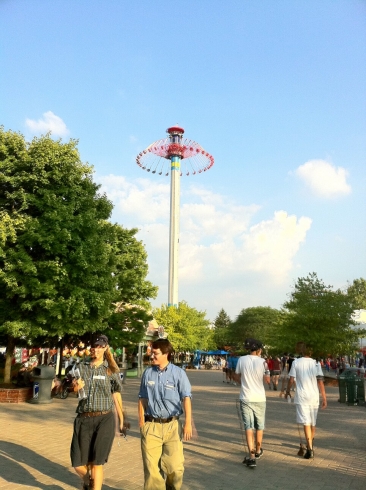 WindSeeker is likely to draw in guests from all over the park.

Perhaps its appropriate, then, that the ride is nestled between The Racer (built in 1972, famous for its “Brady Bunch” riders, and colloquially known as the kick start to the Second Golden Age of the Rollercoaster) and Vortex (Arrow’s first six-inversion coaster, a twisted metal concoction of loops and corkscrews). And one can’t help but find WindSeeker a compelling beacon – Mr. Disney might call it a “weenie” – that successfully draws crowds from all corners of the park.

The physical ride experience is identical to Cedar Point’s WindSeeker (you can read my review of that version here). Entry is a bit difficult as the arms rock precariously back and forth, and the restraint is freeing, but snug. The ride begins its ascent without spinning, causing an unexpected but strangely pleasant bit of vertigo as the world sinks around you. Music that ranges from classical compositions to Hollywood film soundtracks blares from the gondola as it begins its climb up the tower, starting its revolutions about 50 feet up. 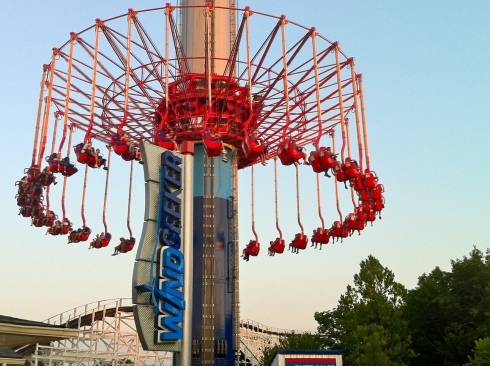 The ride is smooth and serene for those with no aversions to heights, and given the right musical score (and perhaps a shorter height requirement – riders must be 52” tall to board this swing), one can’t help but feel it would make a soothing lullaby. The word "gentle" comes to mind. But it’s not fair to discredit WindSeeker as nothing more than a "family ride." It is a thrill. At 301 feet tall, it's eclipsed only by the park's Drop Zone: Stunt Tower and the Eiffel Tower observation deck in terms of height, and neither of those sends you in 30 mile per hour revolutions, spun on your side at a 45 degree angle. 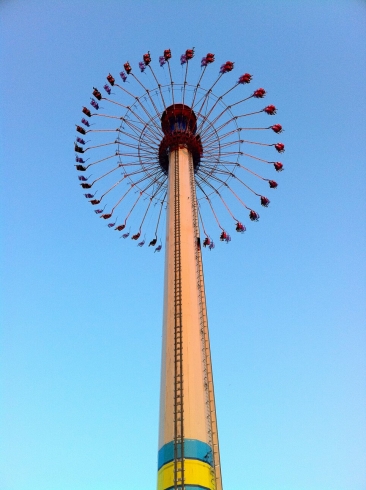 The view is truly incredible. The flat, expansive water of Cedar Point’s ride has been replaced with gently rolling landscapes in all directions. The ride also offers unbeatable views of the park’s attractions, including unprecedented views of The Beast as it snakes its way through the woods that seemingly surround the park. There’s a sense of intensity from the speed and height, but the view is so captivating, it’s possible to get too lost in the moment to notice.

Like Cedar Point’s model, I imagine riders will wish that the tower lingered for just a bit longer once it reaches cruising altitude, but even the ride’s massive 64-passenger capacity can’t keep up with the enormous crowds eager to test out the ride so the medium-length cycle is understandable. Guest reaction, it seems, is positive. And like the word of mouth surrounding the chain’s Maverick installation at Cedar Point, skeptical comments of “Why are they building that?” seem to have been replaced with astonishment – the tower is a lot bigger than it appears in pictures, and the wind blowing in your face isn’t really able to be understood in animations or on-ride videos. 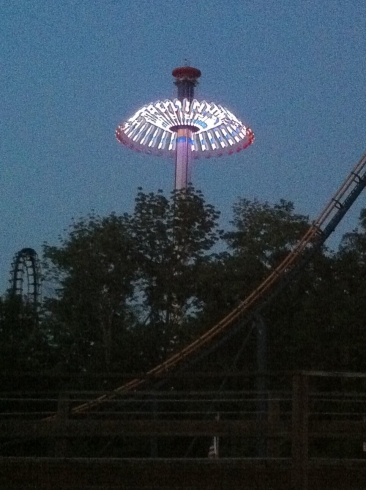 WindSeeker also features a fantastic lighting package unrivaled by any other attraction in the park. Massive LED lights are affixed to the arms of the attraction, which flash, fade, alternate and strobe. Though likely unintentional, the ride casts an unbelievable neon glow across the Racer and truly illuminates the entire area, a stark contrast to the classic, white-lit games and flat rides along the mall.

WindSeeker is a fantastic flat-ride that is truly a sight to see for both riders and on-lookers. It's a worthwhile thrill ride, and also very family appropriate (except, perhaps, for its aforementioned height requirement). What it lacks from Cedar Point’s location, it more than makes up for with its own, and it’s an attraction that is right at home in the family thrill park.

Have you experienced WindSeeker at Kings Island? Did it live up to your expectations? Let us know by adding your own review and rating.

Kings Island has made a host of changes for the 2011 season, including adding the new Dinosaurs Alive! interactive exhibit. Read on for our full Dinosaurs Alive! review and a round-up of the updates to other attractions at the park.