Video: Behind the scenes of SeaWorld's One Ocean show 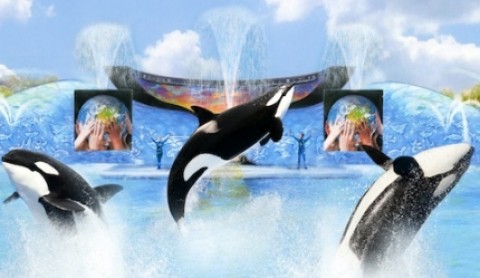 SeaWorld is providing a behind-the-scenes glimpse of its new One Ocean killer whale show, which debuted at SeaWorld Orlando in April 2011. A series of videos released by the company provide a look "beneath the surface" of the show, including the inspiration behind it, the development of its soundtrack and how the whales themselves are trained. All of the videos released so far are embedded below, with further footage to be added over the coming weeks.

One Ocean opened on Earth Day 2011 (April 22) at SeaWorld Orlando, having been in development for over a year. Featuring a new set, panoramic LED screens and an all-new soundtrack, it is set to open at sister park SeaWorld San Diego during the Memorial Day weekend (May 28-30), and at SeaWorld San Antonio by June.

The first video covers the inspiration behind One Ocean, which delivers an educational message that is designed to inspire guests to "celebrate, connect and care" for the ocean.

The second video shows SeaWorld's musical team recording the score that accompanies One Ocean. Three all-new songs - One Song, Side by Side and We're One form part of the contemporary symphonic score for the new show.

The third video highlights how One Ocean aims to combine entertainment with an educational message, highlighting SeaWorld's conservation work.

The fourth video shows off some of the new whale behaviors that have been worked on for One Ocean:

If you've seen One Ocean in action, please let us know what you thought of it by adding your own review and rating.