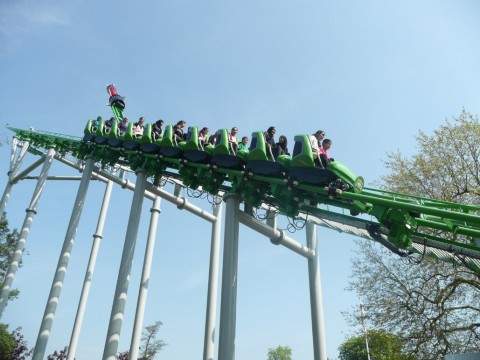 Drayton Manor has opened Europe's first rollercoaster based on the popular Ben 10 cartoon series, boasting a "world's first" design and a heavily themed, interactive queue. Legions of young fans are expected to flock to the park to try out the new ride - but does it deliver an experience that will live up to their expectations?

Opened just in time for the 2011 Easter weekend, Ben 10: Ultimate Mission sees guests joining hero Ben Tennyson as he takes on his arch-enemy Vilgax. The storyline is told through an elaborate queue line, while the ride itself is a new variation on Vekoma's classic Boomerang design.

The family-friendly ride looks set to attract large crowds during its debut season, judging by the lengthy queues on its opening day. Is it worth the wait? Read on to find out.

Most kids will require no introduction to the Ben 10 show, which debuted on the Cartoon Network in 2005. It was succeeded in April 2008 by a follow-up dubbed Ben 10: Alien Force, while the latest series - Ben 10: Ultimate Alien - began airing in April 2010. 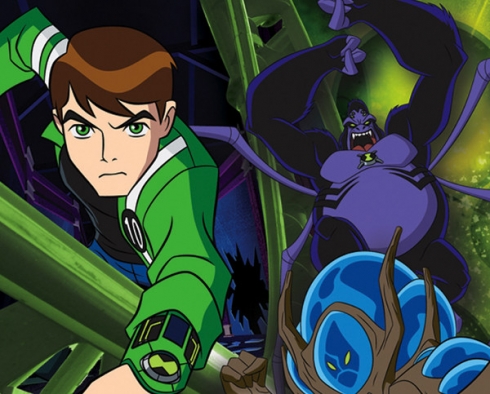 The cartoon show depicts the adventures of 10-year-old Ben, who is able to use a mysterious watch to turn himself into a variety of alien superheroes. Drayton Manor has secured an exclusive deal with Turner CN Enterprises, which controls the Cartoon Network brand, to use the show's characters in its new attraction.

Drayton Manor already features a series of attractions aimed at toddlers and young children in the hugely popular Thomas Land area. Alongside this, it is also home to a range of extreme thrill rides such as the Shockwave and G-Force rollercoasters. Ben 10: Ultimate Mission seems to be aimed at bridging the gap, helping slightly older kids graduate from Thomas Land's tame rides without having to make the formidable leap up to the larger coasters. 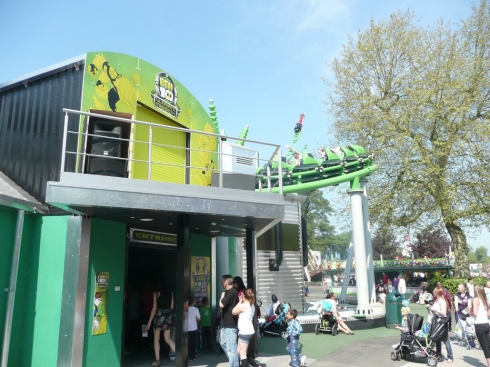 If the queues during the opening weekend are anything to go by, the park appears to have pitched Ben 10: Ultimate Mission perfectly. The coaster attracted large number of families with children aged around 6-11, with a slight bias towards boys (perhaps not surprising given the alien-blasting subject matter of the cartoon). Kids need to be a minimum of 1 metre tall in order to ride.

The plot of Ben 10: Ultimate Mission centres around the Omnitrix, the watch-like device that gives Ben his superpowers. It is told through an indoor queue that snakes around a series of locations from the TV show, helping to set the scene for the ride itself. You can view footage of the queue and pre-show videos above. 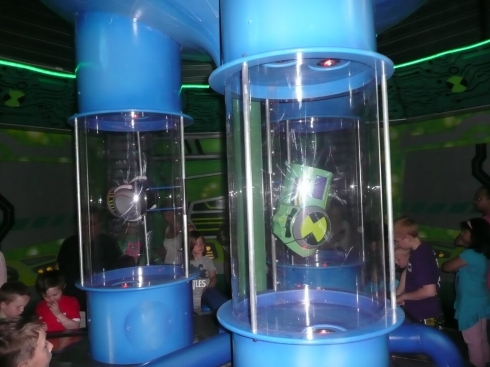 The first room waiting guests enter is Azmuth's lab, on the fictional Galvan Prime planet. Via video screens mounted on the walls, the creator of the Omnitrix explains that he is currently in the midst of trying to fix it. He also asks guests not to touch anything in the lab - tempting them into interacting with the screens dotted around the area. However, it appears Drayton Manor still has some gremlins to work out, as several of the screens had crashed out to the Windows desktop when we passed through. 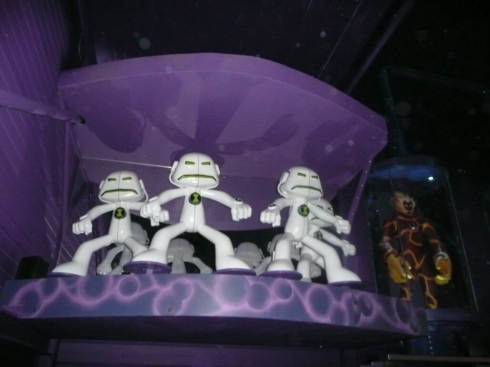 The residents of the Alien Chamber are a friendly bunch.

Following the lab, guests move on to the Alien Chamber, where they are surrounded by models of creatures from the Ben 10 universe. By this point, the building is "under attack" by Vilgax - though we didn't get a real sense of this from the flashing lights in the room. However, a final pre-show video does set the scene for the ride, which sees guests racing to a activate a laser cannon in order to stop Vilgax's ship from landing.

Overall, we found the queue for Ben 10: Ultimate Mission to be a welcome change from the usual bland series of fences used for similar rides elsewhere. It's great to see a UK park taking a Disney-like approach to keeping waiting guests entertained, particularly as the low capacity of ride itself makes lengthy waits inevitable on busy days.

First of a kind

Ben 10: Ultimate Mission is the first Vekoma Junior Boomerang rollercoaster in the world, adapting the well-established Boomerang design to suit a younger audience. While it does not feature any inversions, it retains the basic "out-and-back" layout that inspired the Boomerang's name.

Riders are pulled up the coaster's first hill in reverse.

The ride features a 65-feet-tall first lift hill, which the train is pulled up in reverse. It then traverses the circuit once in a forwards direction, before completing a return facing backwards. The relatively short 590 feet (180 metre) circuit features one large banked turn and a helix, with the coaster hitting a maximum speed of 34 miles per hour. 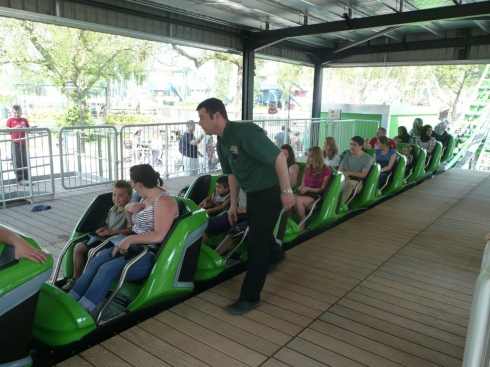 The loading process for Ben 10: Ultimate Mission is something of a bottleneck.

Riders sit two-abreast in Ben 10: Ultimate Mission's trains, held in place by a comfortable lap bar restraint that leaves them with a reasonable degree of freedom. With only 20 people able to ride at a time, and the next set of riders unable to board until everyone has disembarked, the ride can only process a meagre 850 people per hour. On the positive side, the combination of attentive staff and simple lap bars does keep boarding time to a minimum.

As can be seen in the video above, Ben 10: Ultimate Mission is a relatively short ride. After being pulled up the lift hill, there is a moment of anticipation before the train plummets back down through the station below. Riders then experience a force of 3 g as they are slung around a banked turn and a tight helix - not enough to excite hardened thrill-seekers, but more than enough for kids stepping aboard their first "real" rollercoaster. 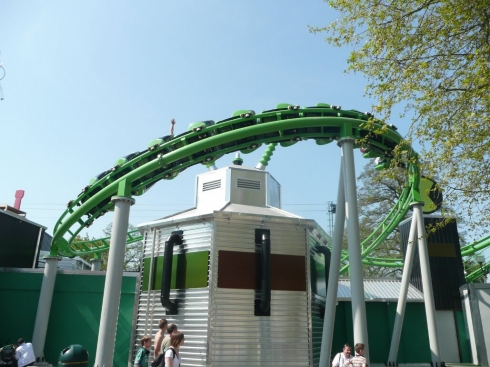 Ben 10: Ultimate Mission's helix pushes riders back into their seats.

After completing the first circuit, the train climbs up a second hill towards the laser cannon. It then retraces its route at a slightly slower speed, as guests race to "escape" from the cannon's blast. Finally, it comes to a stop in the station to end the adventure. 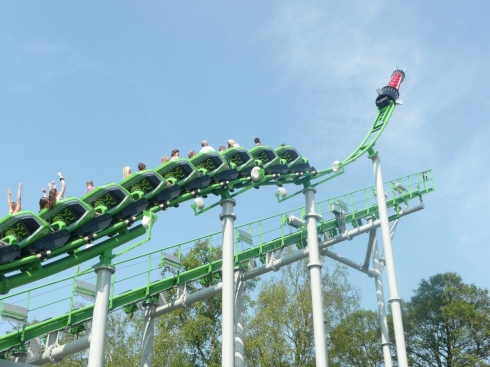 We must admit, we initially found it hard to link the storyline told in Ben 10: Ultimate Mission's queue to the ride itself, though in hindsight we can see how Drayton Manor has tried to tie the design of the ride to the "fly in, race out" plot. The lack of any real space theming around the coaster's circuit doesn't help, and we wonder if locating it indoors would have helped create more of an atmosphere. Nevertheless, we found Ben 10: Ultimate Mission to be a smooth, fun family coaster - if a little on the short side.

Hang on to your wallets 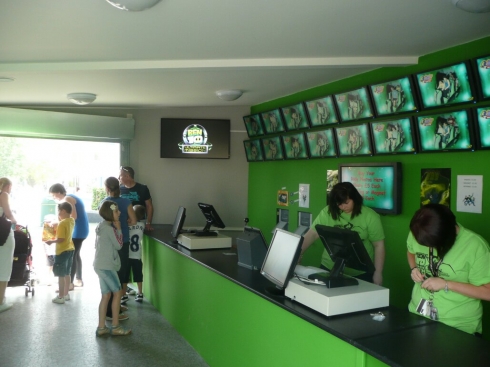 Ben congratulates guests via a video shown in the ride's photo booth.

As with any ride themed around a license as popular as Ben 10, Drayton Manor hopes to recoup a slice of its investment from merchandise sales. Given space constraints, though, it hasn't managed to cram in a shop directly at the ride's exit. Instead, riders are funneled into a photo booth, where they can purchase a photo of themselves on the ride. In a neat touch, the booth features a video of Ben congratulating riders on a job well done, helping to round off the storyline. 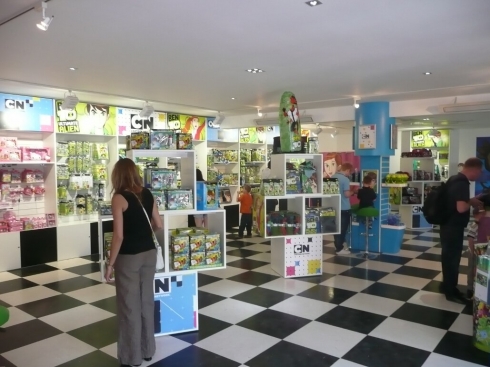 The Cartoon Network store is packed with Ben 10 merchandise.

The shop itself is located across the street, and features little external Ben 10 theming. Inside, though, it holds the expected treasure trove of merchandise designed to help kids prise money from their parents' wallets. Alongside Ben 10 goods, toys based on other Cartoon Network properties such as Hello Kitty are also on offer.

The addition of Ben 10: Ultimate Mission looks to have been a wise choice by Drayton Manor, helping to keep families heading to the park when their kids grow out of the Thomas Land area. Although the coaster itself will be a little tame for many parents, it is still an entertaining ride and offers real thrills for younger kids. 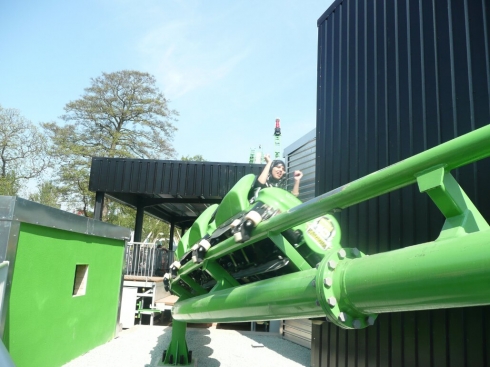 Ben 10: Ultimate Mission is a thrilling introduction to coasters for younger kids.

As huge fans of strongly themed experiences, we're delighted that Drayton Manor opted to focus real effort on the queue area for its new ride. However, we can't help wishing it had followed this through onto the attraction itself. We're not sure an outdoor coaster is the best fit for the Ben 10 license - an indoor version, or even a laser shoot-em-up ride, may have been a better choice. Of course, budget limitations may have prevented either alternative, and the end result is much better than simply dumping a new coaster onto a patch of grass, as is often the case with such rides.

For kids, a ride on Ben 10: Ultimate Mission is an essential part of any visit to Drayton Manor, while skeptical adults should give it a look later in the day when the queues have dropped off. Its short length means it can't be considered a classic, but overall it is a strong addition to the park's increasingly impressive line-up.