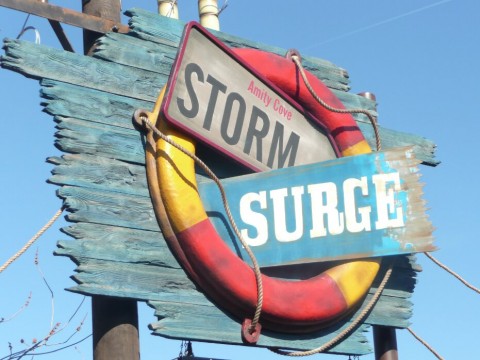 The 2011 season is underway at Thorpe Park, which has added spinning rapids ride Storm Surge to its line-up of attractions. Does the new ride fit the bill for a park which promotes itself as "the nation's thrill capital"?

Adding to its growing list of water rides, Thorpe Park has relocated Storm Surge from its previous home at the closed Cypress Gardens theme park in Florida (the site for the under-construction LEGOLAND Florida). The park is promoting the new addition as a "jaw-dropping wild water raft ride", although it is squarely aimed at a family audience. The first spinning rapids ride in the UK, it continues the park's recent tradition of opening a new attraction every year.

What can guests expect from Thorpe Park's latest new ride? Is it a worthwhile addition to the park, or does it fail to live up to expectations? Watch our video review below, then read on for the full verdict.

Manufactured by Canadian-based waterslide specialists WhiteWater West (who also built Thorpe Park's Depth Charge attraction), spinning rapids rides are in service at parks all around the world. In Europe, heavily-themed versions are in place at Parc Asterix in France (L’Oxygenarium) and Hansa-Park in Germany (Rio Dorado). 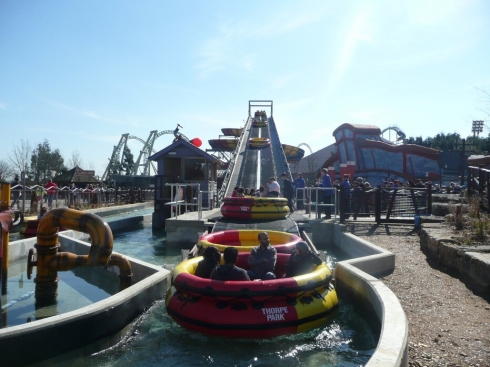 Storm Surge is the first spinning rapids ride in the UK.

Thorpe Park has located its version on the former site of the Octopus Garden children's land, which it has absorbed into the existing Amity Cove area. This places it close to Tidal Wave, the park's tallest existing water ride, and right in front of the pyramid that houses the X:\No Way Out rollercoaster. It also leaves Thorpe Park with a lack of rides aimed at smaller children, although few will mourn the loss of the run-down land which Storm Surge has replaced.

In need of a paintbrush 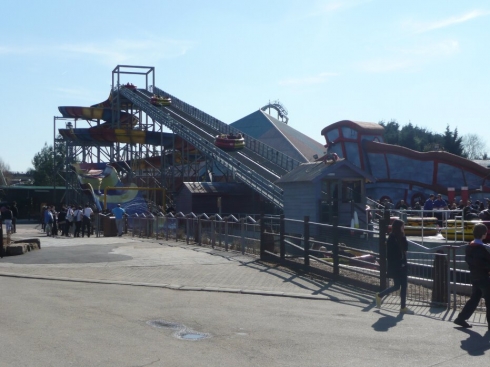 Storm Surge is situated directly in front of X:\No Way Out

When we ran our preview of Storm Surge last September, we expressed our hope that Thorpe Park wouldn't simply "dump the gaudy Storm surge directly in front of the X:\No Way Out pyramid with no thought for aesthetics". Unfortunately, that is more or less what the park has done. The ride has retained its brightly-coloured red, blue and yellow paint scheme from Cypress Gardens, and the support structure completely blots out the pyramid. 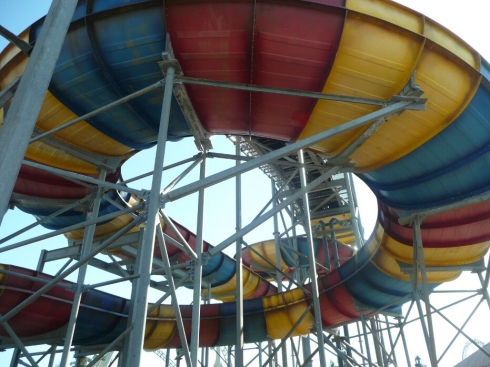 To its credit, Thorpe Park has managed to get Storm Surge up-and-running in time for the start of the 2011 season. However, in doing so it does appear to have taken some shortcuts. The ride's flume doesn't appear to have been repainted (or even cleaned), and already appears a bit run-down. Some leaking joints add to the impression that this is very much a rushed installation of a second-hand attraction, although there is time for Thorpe Park to improve Storm Surge's aesthetics now it is in place. 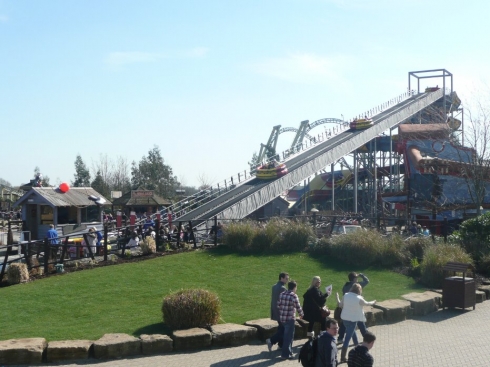 Some areas of Storm Surge have been fully-landscaped, and if viewed front-on it makes for a visually interesting addition to Thorpe Park's skyline. We hope the park eventually completes the rest of the area to the same standard.

Queuing with the hillbillies 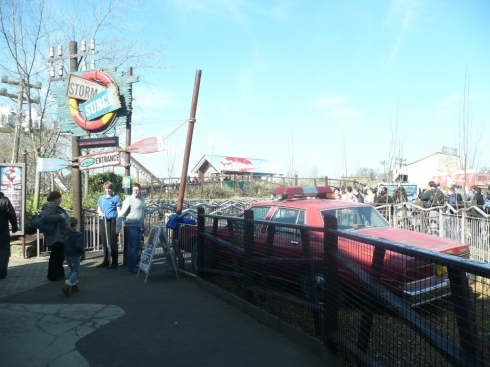 Storm Surge features a "hillbilly" theme, although in reality most of the queue and surrounding area is quite bland. There is at least the hint of a natural disaster backstory, with a fire service car parked close to the entrance. On peak days, actors playing hillbillies will also circulate through the queue line. 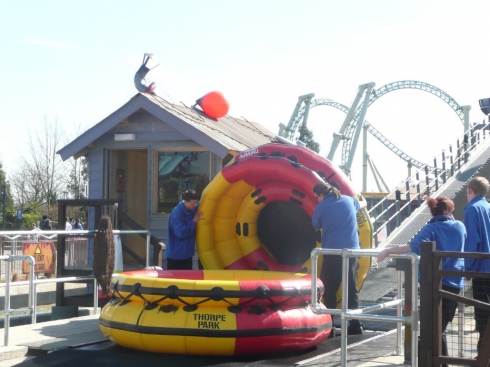 Queue times for Storm Surge during Thorpe Park's opening weekend extended to over an hour at times, although this should subside as the novelty factor of the new ride wears off. However, the length of the lines was not helped by the ride's slow loading times and occasional stops to empty water out of its fleet of rafts. 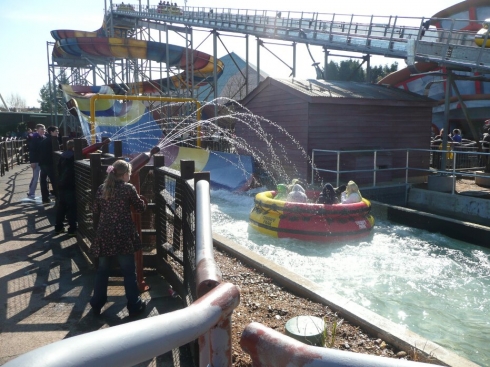 If there are long queues, at least there is the option during the early part of the queue of using one of the handily-placed water cannons to soak other riders. This is a fun addition, although we did see two groups of teenagers come close to blows when one gave the other a particularly harsh blasting from the cannons.

Storm Surge sees groups of up to 6 riders clambering into rubber rafts, which are then carried by a conveyor belt to the top of a 64-feet-tall lift hill. Much of the ride's relatively short duration is spent climbing to the top, although its central location does offer some fantastic views of the rest of Thorpe Park. 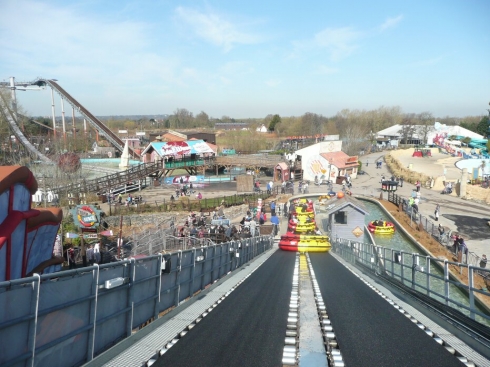 Much of riders' time on Storm Surge is spent on the lifthill.

On cresting the top of the hill, the rafts enter a spiralling downhill section. Although the gentle slope means that the descent is not particularly fast, panels embedded in the slide cause the rafts to spin rapidly. This is a fun effect, and most riders will be laughing (as well as feeling slightly dizzy) for much of the way down. 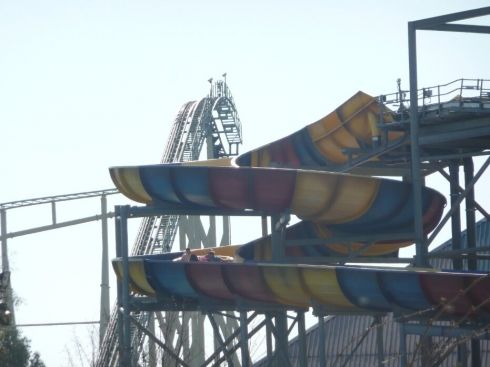 The spiral section is the best part of Storm Surge's circuit.

The duration of Storm Surge is fairly short, though, and many riders will feel disappointed by how quickly they reach the final splashdown section. This, again, is fairly tame and the ride ends with the raft gently skimming onto the water rather than creating a huge impact.

You can view a full video of Storm Surge in action below:

Despite appearances, spinning rapids attractions were not originally designed to get their riders wet. Storm Surge is no exception, but Thorpe Park has remedied this by adding a "waterfall" effect at the end of the ride alongside the water cannons. The combined effect of these can leave you drenched, although not quite as soaked-to-the-bone as Tidal Wave's final drop. 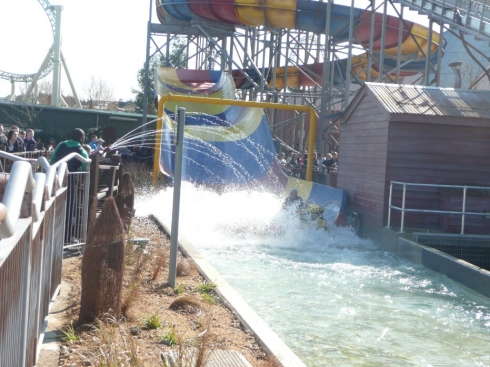 If the cannons aren't in use (as is often the case early in the day), Storm Surge offers an enjoyable (if a little tame) alternative to Thorpe Park's other water rides, all of which soak riders with large volumes of water. The cannons, though, add a much-needed extra thrill to the end of the ride, which would otherwise peter out into a fairly low-key finale.

We have mixed feelings about the addition of Storm Surge to Thorpe Park. It's nice to see a family-friendly ride added to the park after the relentless succession of thrill rides that have been installed over the last few years. However, it would have been nice to see something other than yet another water ride put in place at a park that already has a large number of them.

In its present state, Storm Surge also makes for a fairly ugly addition to the centre of Thorpe Park. We've never been huge fans of the X:\No Way Out pyramid, but it certainly looked better without a mess of support structures directly in front of it. We don't want to judge too harshly, though, until the park has had a chance to finish the landscaping around the ride and (hopefully) give the ride itself a bit of a clean-up. 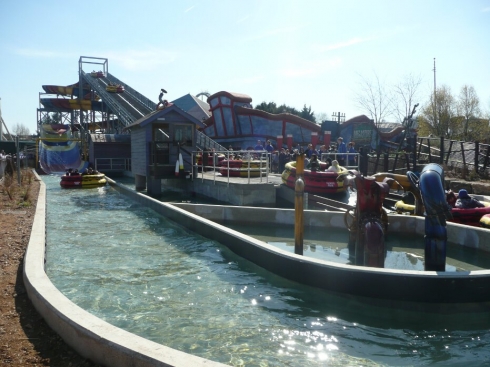 Thorpe Park is short on rides for younger kids, despite the addition of Storm Surge.

We overheard several parents complaining about the removal of the Octopus Garden's "kiddie rides", and we can understand their concerns. Thorpe Park offers relatively little for younger guests, and while owner Merlin is clearly looking to target a different market to its nearby LEGOLAND Windsor and Chessington World of Adventures parks, many families will feature a mix of children of different ages. We hope the park eventually installs a much better children's area elsewhere.

In the end, Storm Surge just about serves its purpose as a stop-gap attraction ahead of the opening of Thorpe Park's highly-anticipated "LC12" rollercoaster in 2012. It can't live up to the standard of the park's best rides, but it does offer a fun experience that can't be found elsewhere in the UK.

What do you think of Storm Surge? Let us know by adding your own review and rating.

plees reed my revue of this ride.(Danger Dan 2010)

Thanks for the review, Dan. Definitely agree that Storm Surge is not worth a 45 minute wait.

Brilliant review, pretty much summing up my own thoughts on the ride :).

The only things I'd quibble would be that firstly, I think the cannons are terrible on all but the hottest of days. Perhaps that's just my aversion to water rides in general, but to me they just seem to be added wetness for the sake of getting wet. Ugh.

Secondly, "The ride's flume doesn't appear to have been repainted (or even cleaned)" - I could be entirely wrong, but potentially are you missing one of the incredibly few bits of theming? The promo pics certainly made it look dirty and worn out. Of course it could just be a lazy way to avoid cleaning it, and any which way the fact that some think it's dirty questions the effectiveness of it at all.

I'm not really a fan of the cannons either, but most people seemed to be enjoying them. As we say in the review, there is the option of riding early in the day when both the cannons and waterfall seem to be out of use.

We did discuss whether the lack of cleanliness was a deliberate theming effect. I suspect that if it is, it's a case of fitting the theme to the state of the ride rather than the other way around. In any case, given that the top side of the flume is kept clean by the water running down it, having a rubbish-looking underside doesn't really match.

The main problem is the ride's location...if you look at some of the other spinning rapids rides, they are located in wooded areas etc. which disguise the support structure. It's difficult to apply any kind of theme to it when it's just dumped out in the open.