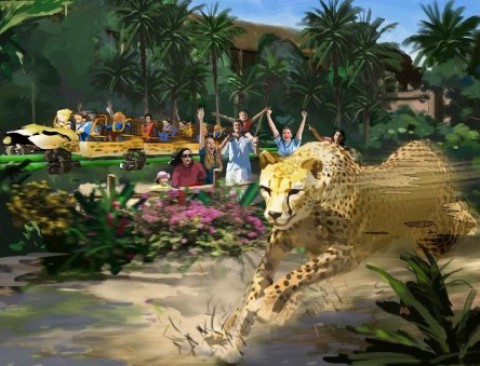 Busch Gardens Tampa has long been renowned for its combination of thrilling rollercoasters and world-class zoological exhibits. In 2011, it will dedicate one of each to the world's fastest land animal - with a new multi-million dollar coaster (Cheetah Hunt) debuting alongside an accompanying live animal exhibit (Cheetah Run).

Both attractions are due to open on May 27, 2011, and excitement levels are building among theme park fans. Cheetah Hunt is set to be the largest rollercoaster ever built at the Busch Gardens Tampa, with its multiple launch sections and rapid twists and turns being designed to give riders a taste of what it's like to be a cheetah hunting its prey. Guests will then be able to see the real thing in action in the all-new cheetah habitat close by.

We're excited about Cheetah Hunt - excited enough to put it at very top of the list of 2011's most exciting new theme park attractions. What is it about the latest Busch Gardens Tampa mega-coaster that has us so intrigued? Read on to find out.

Stretching across the savannah 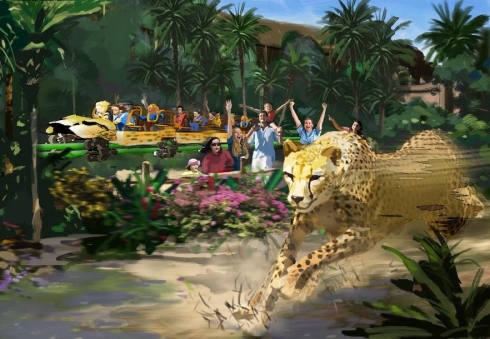 Cheetah Hunt will cover a vast area, sprawling out from the Crown Colony Plaza area of Busch Gardens Tampa to cover large parts of the existing Edge of Africa and Nairobi areas. The ride will begin in the former Crown Colony Plaza monorail station, which is set to be extensively rethemed.

Unfortunately, accommodating Cheetah Hunt has had a major impact on one of Busch Gardens Tampa's most unique and popular attractions. Rhino Rally, which involves guests boarding trucks before heading out on a "safari" that takes in some of the park's most exotic animals, has been shortened in order to make room for the coaster. This has seen the removal of its frequently-malfunctioning water section, which saw guests' vehicles floating downstream on a section of "broken" bridge. Its removal was with dismay by some fans, with it being the only Vekoma Raging River Safari attraction ever built. 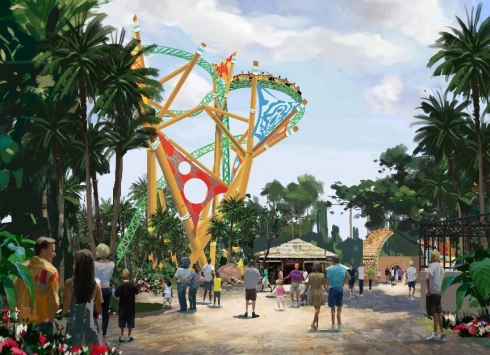 On the positive side, the space does look set to be put to good use. As well as plunging through the manmade canyon area that was once Rhino Rally's river, Cheetah Hunt's circuit will also take in sections of the park's Serengeti Plains - providing a pre-made, perfectly-themed backdrop for the high-speed chase.

Busch Gardens Tampa has selected Intamin to build its new ride, which will utilize Linear Synchronous Motors to propel riders up to cheetah-like speeds. The ride's trains will feature cheetah skin theming, and will be able to hold up to 16 riders each, resulting in a theoretical capacity of 1,375 passengers per hour

Cheetah Hunt will feature a groundbreaking layout, utilising no fewer than three launch sections that will propel riders to speeds of 30, 60 and 40 miles per hour respectively. Although the park has stated that the ride's duration will be 3.5 minutes, this includes loading and unloading time and it is clear from the point-of-view video simulation above that riders will be given little chance to catch their breath as it traverses a 4,429-feet-long circuit. 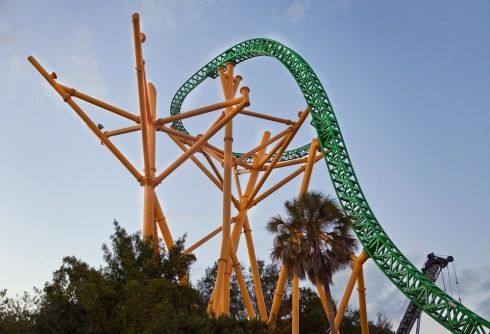 In addition to the launches, Cheetah Hunt's circuit will include a 130-feet drop, banked turns, a heartline inversion and a parabola that will give riders a sensation of weightlessness ("airtime") for 3 seconds. Riders will be subjected to forces of four times the pull of gravity, with the ride designed to simulate a cheetah chasing its prey across the plains.

Unusually for a major rollercoaster, much of the action on Cheetah Hunt will take place close to the ground. Although the tower section will hit a height of 100 feet, the train will quickly plummet down 130 feet into a ravine before racing around overbanked curves in the Serengeti Plain. 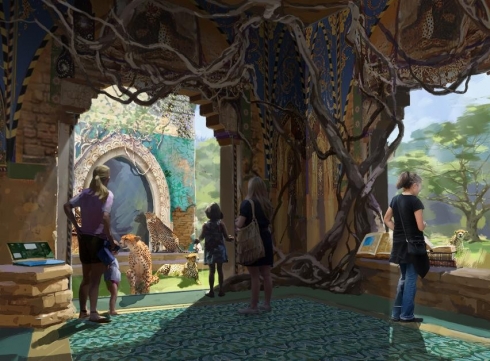 Guests will be able to get close to the world's fastest land animal at Cheetah Run.
Image © Busch Gardens Tampa

Located close to the new rollercoaster, the Cheetah Run exhibit will include special viewing areas that will offer a close-up view of the big cats. Busch Gardens Tampa is acquiring fourteen cheetahs to house in the habitat, some of which have arrived at the park already from other US zoos and breeding programs. Guests wishing to learn more about the animals will be able to access information via touchscreen computer terminals.

Ironically, the real cheetahs would be able to outrun the coaster itself and will perform daily sprints to show off their ability to reach speeds of more than 70 miles per hour. Up to six runs will take place per day, with the cheetahs chasing a lure pulled on a spool for a distance of around 200 yards. The park claims that the regular exercise will help maintain the animals' mental health. 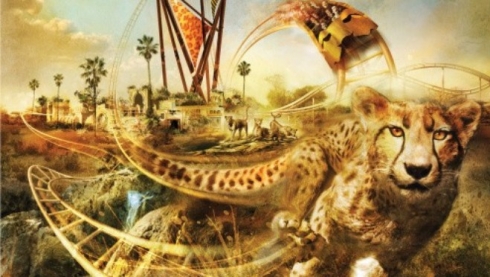 Cheetah Hunt is not the only multi-launch coaster in development.
Image © Busch Gardens Tampa

Cheetah Hunt has all the ingredients to be Busch Gardens Tampa's best coaster yet. The multi-launch, ground-hugging design is a perfect fit with the ride's theme, and the opportunity to learn more about the animals that inspired it is a nice bonus. Overall, the project is strongly reminscent of the Manta rollercoaster/aquarium combination at SeaWorld Orlando - and we're hopeful that the end result will be just as spectacular.

There are some downsides. The loss of Rhino Rally's water section reduces what was one of Busch Gardens Tampa's most unique attractions to being a sub-par clone of Disney's Kilimanjaro Safaris. And while we're not quite as exercised about the choice of the Cheetah Hunt name as some other observers, we have to admit it could be interpreted wrongly as referring to hunting cheetahs rather than hunting as cheetahs.

Misjudged names aside, Cheetah Hunt has generated huge excitement among theme parks fans and 2011 looks set to be a great year for Busch Gardens Tampa. We look forward to posting a full review later in the year - and to trying out the sister coaster that is due to land at Busch Gardens Williamsburg in 2012.