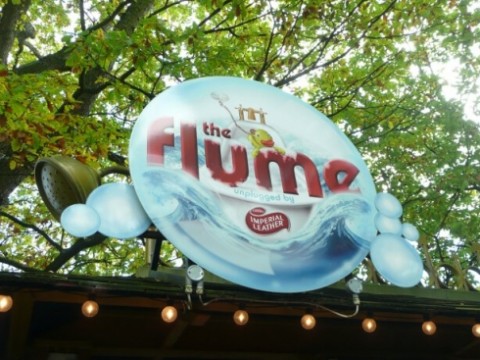 Theme parks have been working with sponsors for years to help fund the construction and maintenance of attractions, often with little or no impact on the actual ride experience. Some have involved the simple addition of company logos to a ride's station, while others have seen advertisements slotted into an attraction's pre-show. However, a recent spate of deals involving Six Flags has raised questions over whether on-ride advertising can go too far, to the point where it detracts from the ride itself.

In our view, the impact of ride sponsorship is heavily dependent on the appropriateness of the sponsor to the ride's theme. If the two are well-matched, a sponsorship deal can actually add value to the attraction, making it more relevant and recognisable to guests. If not, it can break the immersion of guests in the theme park experience and ruin an otherwise excellent attraction.

We've given some examples below of attraction sponsorship deals that have had a positive, neutral or negative impact on guests. Do you agree with our assessments? Are there any other theme park attractions where advertising has improved or detracted from the quality of the ride or show? Leave a comment and let us know. 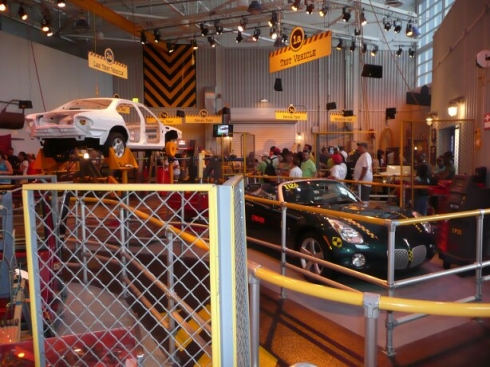 Almost uniquely among theme parks, Walt Disney World's Epcot has been heavily reliant on attraction sponsorship from day one. The enormous cost of building the cutting-edge attractions in Future World and heavily-themed pavilions in World Showcase necessitated the use of outside funds. This has continued to this day, and the much-delayed opening of the Test Track ride in 2008 was made possible by a mega-bucks deal with leading car manufacturer General Motors.

Although still prone to frequent downtime, Test Track provides a near-perfect blend of ride system, theme and sponsor. Based around a mock General Motors test lab, it sees guests boarding "cars" and traversing a series of mocked-up stress tests, before hitting speeds of up to 65 miles per hour in the final, outdoor section.

In addition to offering an exhilerating ride, Test Track provides a genuinely educational insight into the world of car manufacturing. Even the ride's queue, in which automated machines carry out a series of tests on car parts, helps to build anticipation for the ride itself. The General Motors brand - which pervades throughout the entire attraction - lends credibility to the whole endeavour, even if the post-ride showroom is a little much. The overall product is a shining example of how theme parks can work with sponsors to deliver an attraction that works for guests as well as their bottom line. 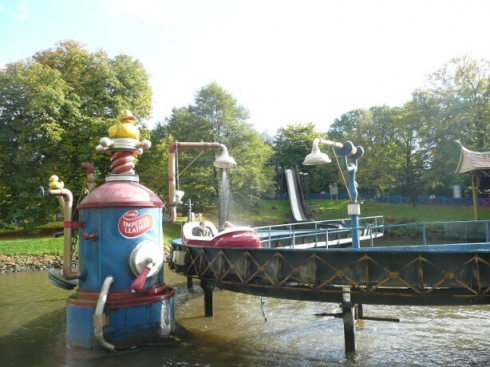 The deal that added Imperial Leather branding to Alton Towers' 29 year-old log flume is a borderline case. The attraction has long featured minimal theming, and a bath products brand is a reasonable fit with a water ride. The updated ride vehicles, which now resemble bathtubs rather than logs, and the rubber ducks that are dotted around the ride circuit at least add some interest to what was a fairly drab environment.

The main downside to the Imperial Leather theme is that it shares nothing in common with the attractions surrounding the log flume. Rubber ducks are hardly a good fit with the African theme of Katanga Canyon or the pirate theme of nearby Mutiny Bay, making the log flume stand out in a negative way. The same can be said of the Bubbleworks attraction at sister park Chessington World of Adventures, where Imperial Leather theming contrasts bizarrely with the vampire-themed Transylvania area in which the ride is located. 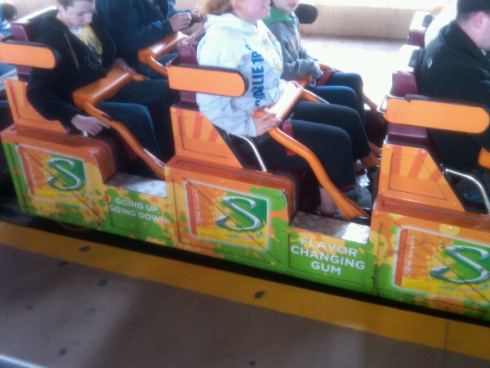 Stride Gum has no connection with the theme of El Toro.
Image source: Plixi

The recent advertising deals struck by Six Flags have increasingly strayed from any pretence of consistency with rides' existing themes. While a deal to place ads for the Karate Kid movie on the Ninja rollercoaster at Six Flags Over Georgia was just barely justifiable, follow-up deals which have seen Ninja's trains papered with ads for Axe Bodyspray and the El Toro coaster at Six Flags Great Adventure covered in ads for Stride Gum are pushing guests' patience to the limit.

Of course, the advertising contracts offer a quick-and-easy way for struggling Six Flags to generate some extra cash. It's much easier to stick some basic banners onto a Vekoma rollercoaster train than it is to strike full movie-tie-in theming deals such as the ones for its planned Green Lantern coasters at Six Flags Magic Mountain and Six Flags Great Adventure.

However, in the long-term we believe that Six Flags is damaging its brand with the "overlay" advertising on its rides - something the chain can hardly afford to do after the battering it has taken in recent years. Although Six Flags parks have never been renowned for their strong theming, in-your-face advertising such as that seen on Ninja is a step too far and breaks any sense of immersion that guests have paid good money for.

It's difficult to be too negative about sponsorship of theme park attractions in general, given that they help to fund the huge capital cost of constructing new theme park rides and shows. When care is taken, the addition of branding to an attraction can be at worst a minor distraction for guests and at best an actual improvement.

However, the matching of a sponsoring brand to an attraction's theme is essential. The recent deals by Six Flags, which have affected many attractions across its chain of North American parks, show a lack of respect for its customers. Having paid to enter a "theme park", guests have a right to expect rollercoasters to be themed attractions, not advertising hoardings on wheels. We hope the Six Flags deals are a misjudged anomaly, and not the start of a downward trend.

But I suppose that El Toro Stride Gum was taking things far too far! It's ok when there is just a little sign or something, not on the actual trains!

Well I barely notice it, plus I actually LIKE the idea of companies paying theme parks for advertising, because the more money the theme park gets, the better a theme park it will become!