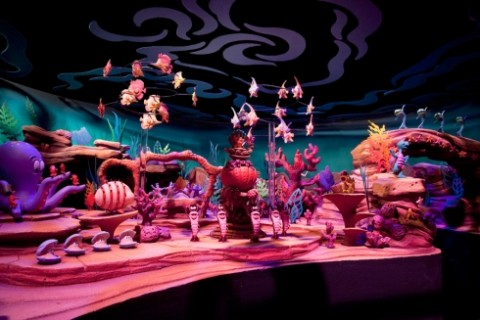 The $1.1 billion series of upgrades to Disney California Adventure will continue in 2011, with the opening of a major new attraction based on the 1989 animated movie, The Little Mermaid. Aimed squarely at Disney's core family audience, The Little Mermaid: Ariel's Undersea Adventure will see the company return to its roots with a classic plot-driven dark ride. Can a ride based on a 20-year-old movie help transform the fortunes of Disneyland's oft-maligned sister park?

Disney will certainly hope so, having earmarked $100 million of the eye-watering improvements budget for California Adventure for the Little Mermaid attraction. It will be the second major addition to the park in as many years, following hot on the heels of the World of Color night-time spectacular. Another new E-Ticket attraction, Radiator Springs Racers, will anchor the Cars Land expansion that will open at Disney California Adventure in 2012.

Several Little Mermaid attraction concepts have been contemplated in the past, and a dark ride was originally set to open at Disneyland as long ago as 1993. This, and a subsequent ride planned for Disneyland Paris, never made it as far as construction. However, Ariel will be a major feature at Disney's US parks over the next few years, with a clone of The Little Mermaid: Ariel's Undersea Adventure due to open at Walt Disney World's Magic Kingdom in 2013.

With such a huge investment behind it, Disney needs Ariel's Undersea Adventure to provide a boost to attendance figures at California Adventure. So what has it got in store for expectant fans of The Little Mermaid? Let's take look.

The Little Mermaid: Ariel's Undersea Adventure will be located in the Paradise Pier area of Disney California Adventure, which has seen significant changes over the last two years. Criticized by fans for aping the seaside amusement parks that Walt Disney himself sought to distance Disneyland from, it has undergone an extensive retheming exercise and will soon play host to both World of Color and the Little Mermaid attraction.

Elements of the Palace of Fine Arts will be incorporated into the new building.
Image © Disney

To make room for the new addition, Disney removed the Golden Dreams theatre that had previously hosted a film about the history of California. Although the theatre was razed last year, the exterior of the Palace of Fine Arts remains in place and will be redecorated with an Ariel statue placed on top. A dramatic arch will feature relief carvings of Ariel's father King Triton and other mermaids, while the rest of the building's decoration is designed to blend seamlessly with the other elements of the amusement park-themed Paradise Pier.

Close to the ride building itself will be a water play area for young children and a garden, while the "Ariel's Grotto" meet-and-greet area is expected to be moved closer to the new attraction.

Ariel's Undersea Adventure will employ an Omnimover ride system similar to that used for Disneyland's Haunted Mansion, enabling guests to continually board and disembark without the ride stopping. The "clamshell" ride vehicles are reminiscent of those used in the Nemo & Friends attraction at Walt Disney World's Epcot, and will rotate to face the different scenes presented during the ride's circuit. 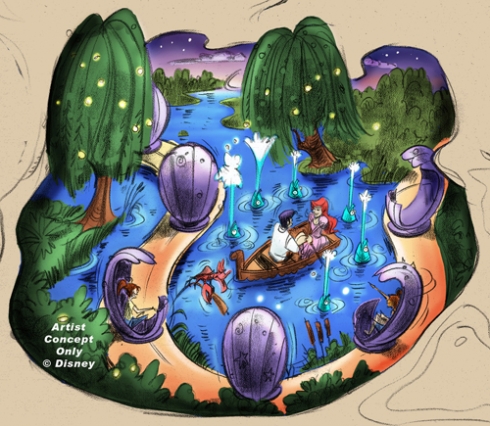 The tried-and-tested Omnimover system will be used for Ariel's Undersea Adventure.
Image © Disney

Although riders will not really travel underwater during the course of their adventure, Disney hopes to recreate the sensation by projected rippling lights onto the back of the clamshells. Combined with a blast of cool air, this will give the impression of submersion as the action moves from on-land to below sea level.

To ensure that the ride can be enjoyed by as many guests as possible, Ariel's Undersea Adventure will feature several special wheelchair-accessible vehicles known as King Triton's Chariots. These will enable guests in wheelchairs to enjoy the full ride experience without leaving their chairs. 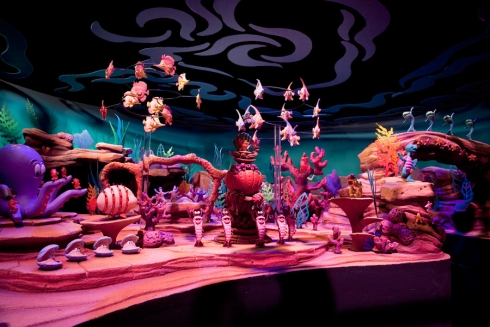 The storyline for The Little Mermaid: Ariel's Undersea Adventure incorporates key locations and musical numbers from the movie, and will therefore be instantly familiar to many Disney fans. Rather than the 3D video projections seen in some recent dark rides, Disney will rely heavily on its traditional forte - animatronics - to bring the story to life.

A host of characters from the Little Mermaid movie will be featured in the attraction, including Ariel herself, Prince Eric, King Triton, Flounder and Ursula. Ariel's seagull friend, Scuttle, will narrate the ride and fill in guests on its backstory. This follows the plot of the movie, with mermaid Ariel striking a bargain with the unscrupulous seahag Ursula in order to meet a prince on land.

A full scene-by-scene breakdown on the LA Times website reveals the planned sequence of the new ride, although it doesn't give away the closely-guarded ending scene. Although we won't reproduce the breakdown here to avoid spoiling the ride for those who wish to retain some element of surprise, it goes without saying that guests can expect to hear a number of familiar, rousing musical numbers as they journey through Ariel's world.

Helping to ensure an authentic, movie-like experience, the voice of Ariel will be provided by the voice actress from the movie, Jodi Benson. The film's composer, Alan Menken, will provide the ride's soundtrack.

Several videos showing off elements of The Little Mermaid: Ariel's Undersea Adventure have been released online as Disney seeks to build anticipation for the ride ahead of its 2011 opening. In June 2010, Executive Producer and Vice President from Walt Disney Imagineering, Kathy Mangum, offered up some new details at Disneyland's "What Next?" event. These were captured by Inside the Magic's Ricky Brigante, whose video is embedded below:

Finally, if you are curious about what Disney's designs were for the Little Mermaid ride that was planned for Disneyland in 1993, you can see a preview video for it below. This gives some indication of the atmosphere and elements that riders can expect to encounter on Ariel's Undersea Adventure, although the actual ride will differ significantly:

With rival Universal investing huge sums of money in a high-tech new ride system for its Harry Potter and the Forbidden Journey attraction, it may be hard for some theme park fans to get too excited about another Omnimover-based Disney dark ride. We can sympathise with this viewpoint, and Ariel's Undersea Adventure certainly doesn't set our pulses racing in the same way that the plans for Radiator Springs Racers (due to open nearby in California Adventure in 2012) do.

It's clear, though, that Disney is aiming Ariel's Undersea Adventure at families with younger children, who have been sorely short of options at California Adventure since its 2001 opening. With that in mind, we're pleased to see Disney returning to its roots and investing in a world-class family dark ride. Nobody does animatronic storytelling better than Disney's Imagineers, and we expect a top-notch experience packed with classic tunes that guests will be humming for days afterwards.

While there are many who still question Disney's plans for California Adventure - with some hoping for an even more radical transformation - we think they will improve the park dramatically. Although Ariel may be a slightly strange fit in a park packed with more modern Pixar characters, she should bring a touch of magic to Paradise Pier. We'll have to wait until 2011 to see just how big an impact she can have.