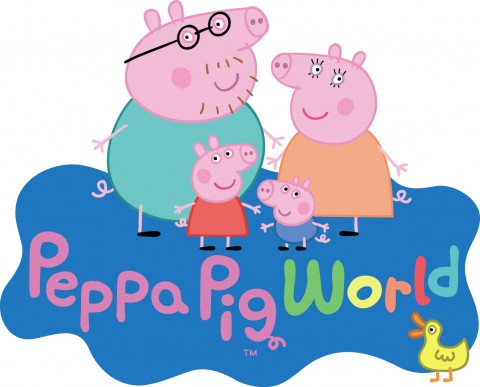 Easter 2011 will see the opening of Peppa Pig World at Paultons Park, the first ever theme park land dedicated to the popular children's cartoon character.

Peppa Pig World is due to open on April 9, 2011, and will feature child-friendly attractions themed around characters from the Peppa Pig television show. Paultons Park has secured an exclusive license with owners eOne, meaning that it will be the only theme park in the UK and Ireland to host a Peppa Pig-themed area.

Theme Park Tourist recently visited Paultons Park to get an update on the park's plans for Peppa Pig World and to tour the construction site. In this preview we'll take a look at what parents and their little ones can expect when the the new land throws open its doors.

Who is Peppa Pig?

Most parents of young children will be familiar with the Peppa Pig TV series. The show revolves around the life of the eponymous pig, as well as her family and friends. Aimed at pre-schoolers but popular with many parents for its humorous elements, it has sold over 3 million DVDs in the UK to date. Sales of merchandise based on the series reached £100m in the UK last year, and it has now been shown in 180 countries worldwide.

The deal to license the Peppa Pig characters is something of a coup for Paultons Park, which will market the attraction nationwide. It hopes to replicate the success that other UK theme parks have had with children's areas based on licensed characters, such as Drayton Manor's Thomas Land. 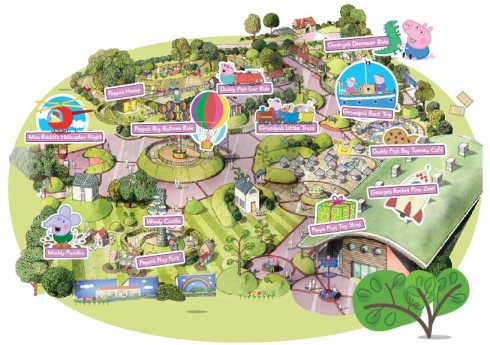 Peppa Pig World will span a three-acre area of Paulton's Park, and will include seven brand-new rides based on Peppa and friends' adventures in the TV series. Indoor and outdoor playgrounds (George's Rocket Play Zone and Peppa's Play Park), a toy shop, a cafe (Daddy Pig's Big Tummy Cafe) and a number of walkthrough attractions will also be located in the new land. 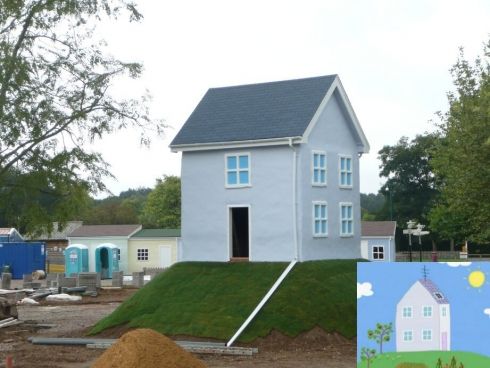 Unlike many other kids areas in theme parks, which feature a selection of lightly-themed rides gathered together on a patch of tarmac, Peppa Pig World will be a heavily-themed experience. Paultons Park wants guests to feel as though they are actually stepping into Peppa's universe, and it's obvious from the work so far that the park is pulling out all the stops to achieve this.

Dotted around Peppa Pig World will be familiar landmarks from the TV series, including Peppa Pig's House, Grandad Dog's Garage and the School. As well as appearing almost identical to their TV counterparts, these locations will be mini-attractions in themselves. For instance, guests will be able see Peppa and her family eating breakfast at her house, visit Grandpa Pig and Grandma Pig at their house and see Grandad Dog hard at work repairing cars at the garage. All of this will be achieved through extensive use of animatronics, bringing the Peppa Pig characters to life. 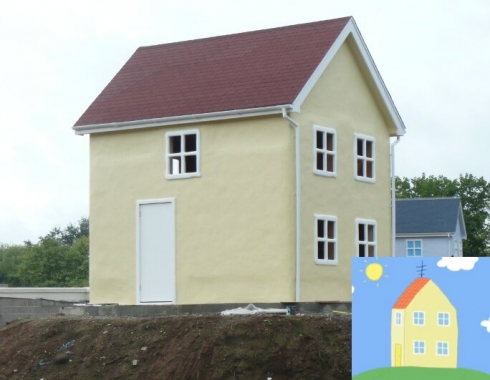 Of course, the Peppa Pig TV show is entirely two-dimensional, posing a challenge for the designers of the fully three-dimensional theme park version. To help achieve a familiar look, all of the buildings in the land featuring slightly "wonky" architecture, and are located on top of small hills, just as in the TV show. Even the huge building that houses the gift shop and indoor play area features an all-grass roof, so that it does not disrupt the overall theme.

The creation of a strongly-themed area is something of a departure for Paultons Park, which usually relies on its natural landscaping rather than artificial features when developing new attractions. To help develop Peppa Pig World, the park has hired the same company that designed Thomas Land at Drayton Manor, RMA Limited. From what we've seen to date, this looks like an investment that will pay off handsomely. 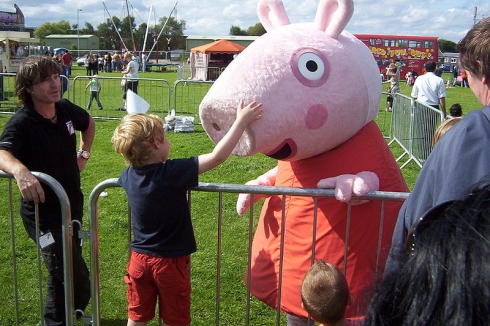 Peppa Pig makes an appearance in the UK in 2009
Image: ChrisTheDude, Wikipedia (License)

As well as the animatronic versions that will occupy the various buildings around Peppa Pig World, children will have a chance to meet Peppa Pig and other characters "in person". Although the characters will not wander freely around the land (for fear of being mobbed by groups of tiny fans), they will be available for regular meet-and-greet sessions in front of the School House.

Rides that fit the theme 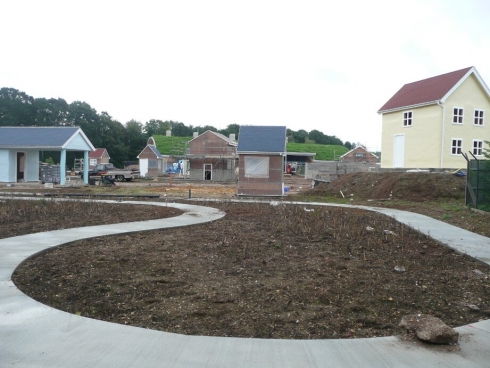 Just like the programme, Peppa Pig World's attractions will be aimed at children aged six and under. However, the park is keen to stress that every attraction will be able to hold adults as well, so that parents and their children can enjoy them together.

Fortunately for the park, the adventures of Peppa and friends in the TV show fit very well with standard "kiddie rides". The 7 rides in the area will be carefully themed to match the locations and vehicles seen in the show, making them instantly recognisable:

In addition to the rides, another key element of the TV show will make the transfer into the real world. Fans will be able to emulate Peppa's favourite pastime - jumping up and down in Muddy Puddles. Parents will be relieved to hear the puddles aren't real - instead, the attraction will be made of soft material which sprays up water when kids bounce around on it. 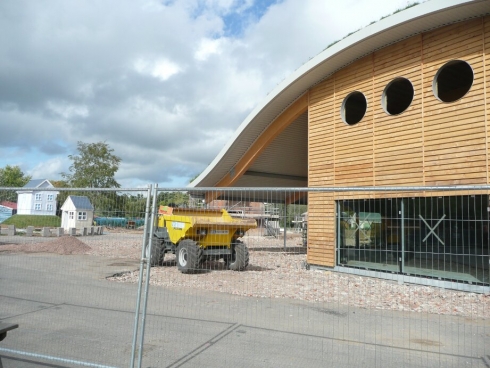 Parents of young Peppa Pig fans will already be familiar with the vast range of merchandise that has sprung up based on it, ranging from bedspreads to model spaceships. With Peppa Pig World's toy shop set to cover some 2500 square feet, expect to see all of this plus much more on offer to park guests. Paultons Park is already selling Peppa Pig items in its gift shop in anticipation of a lucrative trade, and parents should brace themselves for a wallet-emptying experience come April. 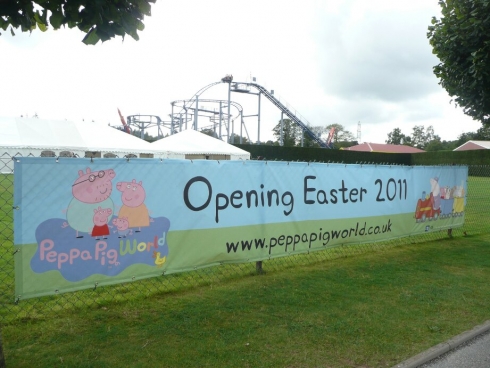 Peppa Pig World will open its gates next Easter

We're genuinely excited by what we've seen of Peppa Pig World, both on paper and in construction. The project is reminiscent of a smaller-scale, pre-school version of Universal's Wizarding World of Harry Potter - take a wildly popular license, recreate it in lavish detail and cash in on the extensive merchandising opportunities. It's difficult to see how Paultons Park can go far wrong, and the new land has the potential to establish the obscure local park on a national basis in the UK.

Of course, the quality of the land itself is a key factor, and there's every indication so far that it will be a great experience for both kids and their parents. Paultons Park is fortunate that Peppa Pig's many episodes provide perfect tie-in opportunities with relatively simple attractions (such as the Balloon Ride), and its focus on faithful theming looks set to pay off handsomely.

The one concern for the park must be whether the Peppa Pig TV show can maintain its popularity in the face of continuing competition, and if it will prove to have the longevity of other properties such as Thomas the Tank Engine. Given the quality of the show, however, we're confident this will be the case - and even if it isn't, Peppa Pig World should still be an attractive, entertaining place to take young children.

Following the addition of Cobra (the UK's first Gerstlauer bobsled rollercoaster) in 2006, the opening of Edge (the only Zamperla Disk 'O Coaster in the UK at the time) in 2009, and a successful rebranding exercise, Paultons Park looks to be on its way to an exciting future. We'll be visiting next year to see whether Peppa Pig World can live up to our high expectations.

You can find out more information about Peppa Pig World from its official website. More images of how the land is shaping up so far can be found in Theme Park Tourist's Peppa Pig World construction gallery..

How to Save Money at Paultons Park