The Big Debate: Was Kings Dominion right to slow down Intimidator 305 after blackout reports? 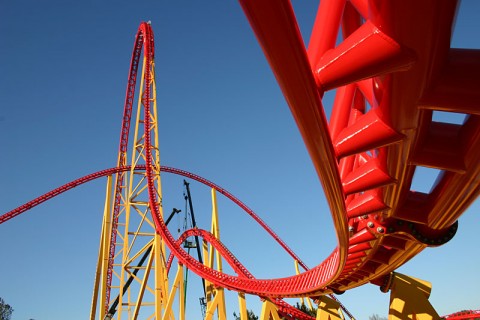 In the first of a series of articles in which we'll ask readers to share their opinions on current theme park topics, this week we're asking for your views on Kings Dominion's decision to add trim brakes to its Intimidator 305 rollercoaster.

The high speed and intense twists and turns of Intimidator 305 are designed to mimic the experience of NASCAR driving, with the coaster's name being a tribute to 7-time NASCAR champion Dale Earnhardt. The $25 million Intamin Giga Coaster opened to rave reviews from coaster enthusiasts on April 3, 2010. However, one particularly tight turn has led to many riders experiencing "blackouts" due to the high g-forces exerted on them.

In response, Kings Dominion installed the brakes on the coaster's 300-feet first drop, reducing its top speed from 92mph to around 79.5mph. Despite this update (and the addition of new shoulder harnesses to the ride's trains), reports of blackouts have continued to flood in. In fact, much to our surprise, Theme Park Tourist's original article on the addition of the trim brakes has become one of the most popular stories we've ever published.

You can see a great point-of-view video of Intimidator 305 below, courtesy of Theme Park Review:

What exactly causes the blackout phenomenon, which occurs during Intimidator 305's sharp first bend (immediately after the first drop)? Essentially, when the coaster pulls out of the drop and rockets around the corner at high speed, positive g-forces are exerted on the rider's body. This effect - which is the opposite of "weightlessness" - causes blood to rush to the lower extremeties of the body, starving the brain of oxygen. This can cause both blackouts, where a person loses vision completely whilst retaining consciousness, or less severe greyouts in which vision is retained but with a perceived dimming of colors. See CoasterForce's excellent g-forces guide for further information.

It's clear from the comments on TPT's news stories that some riders love the blackout sensation, while others hate it. Kings Dominion is still experimenting with the location and level of braking on Intimidator 305, so we thought this was a great time to revisit the debate and get your views. First, let's recap the arguments made to date on whether the park was right to add trim brakes to the ride.

Predictably, the arguments for altering Intimidator 305 center around the need to eliminate the blackout sensation. One rider, Amy, claims to have lost her contact lenses during the ride and comments: "It is ridiculous to build a ride that will cause someone to pass out. I suggest to people to keep their eyes closed if they wear contacts and not to ride if you don't want to pass out!"

The subject is being actively discussed at the park, with BigDragon claiming: "Most people were commenting on the sensation. Some liked it, but others like me really don't like the feeling...I found I was actively fighting against the ride instead of enjoying it...It's cool to suck it up and not let the ride beat you, but everyone in my group pretty much agreed never to ride it again once they got over themselves. We were far from alone."

With some suggesting that the blackout reports and negative word-of-mouth are already affecting the ride's popularity, many are understanding of King Dominion's desire to mitigate the effects. Coaster Fan backs the addition of the brakes, saying: "For the average rider, I am sure this sensation is too much hence the lack of ridership. But the park would not spend the money to build an amazing ride and then have no one want to ride it. I support their decision to modify it and appeal to the largest demographic of guests."

Joel Bullock, reviewing Intimidator 305 on his popular Coaster Critic blog, also backs Kings Dominion's move. He says: "If you feel that the ride was better before, then please hold those rides dear, but you’re wasting your time by complaining. They have to build these mega attractions so that they suit the general public, not just the thrill junkies out there. For 99.99% of people, blacking out on a roller coaster is not a desired state. No matter if the airtime is better. And, for the record, I barely noticed the trims."

Intimidator 305 was open for several weeks prior to the installation of trim brakes, and some of those who experienced the ride in its "untrimmed" state are not happy about the change. Among them is Chris B: "I took a ride before the trim brakes were added and I am now very disappointed with the ride. Not in whole, but compared to what it was and what it is now. Now it's just another ride. It WAS the best. The 1st time I rode it I did have a brief grey out. This is what 'intimidated' me about riding it again."

Others agree that the brakes have taken the edge off Intimidator 305, with TwinTurbo300zx complaining: "The drop feels really slow. Once you get to the top and start to go down, about half-way through you can feel the brakes slowing down the cart. It actually felt like we slowed down so much that the carts behind us were going to flip over our heads (we were in the front), kind of like if you used only the front brake on a motorcycle."

Many are unsympathetic to the view that Kings Dominion needs Intimidator 305 to appeal to a wide audience, pointing out (often in the strongest terms) that the park has tamer rides on offer for those who want them. Winner offers one of the less offensive opinions: "If they continue to slow it down, it may as well only be half as tall. The speed is the main attraction to this ride. The signs clearly say that if you're not in the right state of mind or being, to not ride. Sorry that some people didn't enjoy it, but not every ride is meant to be enjoyed by every patron to the park."

While most commenters to date are in one camp or the other, Alien does offer a more balanced view - and a suggestion for an alternative approach: "While I thought it was an amazing ride, I did think it was a little too intense...I would suggest removing the trims to keep the speed, re-profiling the turn so that it is an overbanked hill / turn, much like that on Millenium Force (at Cedar Point). I believe that would cut the sustained g's & keep the pace up. Further along the ride I would also re-profile the viscious direction changes to make them smoother, longer and frankly less likely to damage peoples necks. Make the coaster once again what it is supposed to be, a gravity driven powerhouse of fun."

It's difficult for us to comment on the Intimidator 305 changes, given that we've not yet been able to experience the ride - so please take our views with a pinch of salt. However, we can sympathize with Kings Dominion wanting to ensure that its huge investment pays off. Quite simply, a ride that only appeals to extreme coaster junkies is not going to achieve the park's aim of attracting new and returning guests.

Having said that, while the addition of trim brakes was probably inevitable given the publicity around the blackouts, we hope it is only temporary. Kings Dominion will have an opportunity to make significant updates to the ride during the off-season, and we'd like to see the first turn (and others, if necessary) re-profiled to reduce the g-forces to manageable levels whilst retaining the ride's high speed. A ride which tames its velocity is hardly a fitting tribute to a NASCAR racing legend, after all.

What do you make of Kings Dominion's decision to slow down Intimidator 305? How would you like to see the ride updated in future? Do you want it restored to its original configuration? Let us know using the comments section below!

i was 48 when the ride opened. i did not blackout until i rode it 3 times in a row with no line. i will be there this summer to see the difference.

I just it this past weekend (7/10). I'm a healthy young 25 year old guy and definitely a thrill seeker in pretty much everything i do. I've always loved bigger better faster rides, but this thing was borderline too much for me. I grayed out going up and over that hill after the first turn and looked over at my girlfriend and she was passed out. eyes rolled back neck limp. I was freaked out and kept asking her if she was ok the rest of the ride. she came to and responded in the first twisty but i was pretty shocked and couldn't really experience the rest of the ride. I left with a headache and a strange reality check feeling as opposed to fun. I may still give it another go, but I'm not sure... Pretty intense.

i just rode the 305 on 6/4 and experienced just a 1-second blackout each time right when it went into the turn after the first drop. i've been on millenium force (same height) and the 120mph 400ft top thrill dragster - never blacked out on either of those two. I think they should remove the trim brakes so the hill is still fast but take out that turn at the end of the hill - the turn is what seems to be the problem.

hope to include a very big looping and a longer layout with more thrill elements, cobra rolls, 360° Twists etc.

or change Intimidator 305 into a Terra Coaster?

i hope for just the opposite. the elements about millenium force, magnum xl 205, etc. are that they are more about a series of hills than the twists and turns and crap - it allows for a faster ride, more air time and stomach feeling, and without being banged around a lot. take out the turn at the bottom of the first him and put another smaller hill, and you probably would have better stomach feeling and less blackouts.