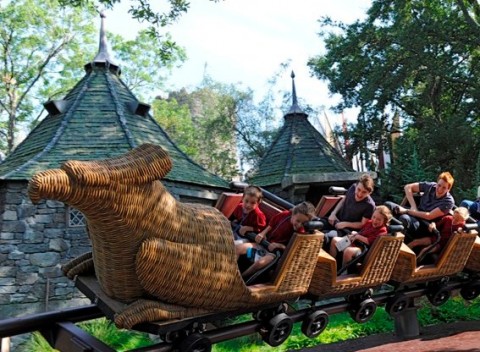 In the previous articles in this series, we looked at how online reviewers rated Universal's Wizarding World of Harry Potter overall, and what their views were on the area's shops and restaurants. In this final part, we'll take a detailed look at opinions on the Wizarding World's rides, including mega-attraction Harry Potter and the Forbidden Journey, plus rollercoasters Dragon Challenge and Flight of the Hippogriff.

When you've read through the online opinions, we'd love to hear your views on the Wizarding World, whether you've already visited it or are dreaming of a future trip. If you complete our Wizarding World of Harry Potter survey by July 20, 2010, you’ll be entered into a draw to win a full box set of Harry Potter books along with other great prizes.

Universal is banking on Harry Potter and the Forbidden Journey – the headline attraction at the Wizarding World – to prove a huge draw for guests. The hype surrounding the ride prior to it opening reached unprecedented levels, with many openly discussing the possibility of it becoming regarded as the best theme park attraction in the world – despite few details being released into the public domain.

It's rare for a new theme park attraction to achieve unanimous approval from those who ride it, particularly when expectation levels have been raised to such a high degree. However, of the 15 reviews of Harry Potter and the Forbidden Journey that we've found to date, all of them give the ride a huge thumbs up. 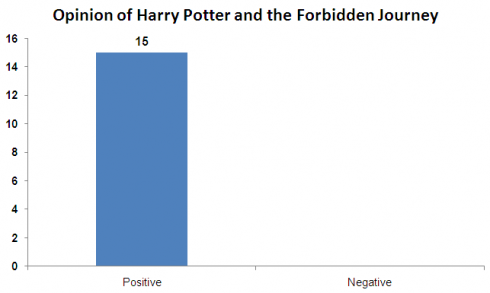 So what is it about Harry Potter and the Forbidden Journey that has led to such adoration from those who've been lucky enough to ride it? Let's start with the queue, which snakes through the interior of Hogwarts Castle and has been described by many as a walkthrough attraction in its own right.

SPOILER WARNING: There are spoilers throughout the rest of the Forbidden Journey section (though none gives away the "ending" of the ride). If you don't wish to read these, skip to the Dragon Challenge section below.

The one part of Harry Potter and the Forbidden Journey's vast queue line that comes in for any serious criticism from reviewers is the outdoor "greenhouse" section. This will perhaps come as no surprise, given the sweltering Florida climate and the lack of air conditioning in the area. The problem is compounded by the requirement for guests to place bags into lockers before entering the queue line, potentially depriving them of thirst-quenching bottles of water. The Sun Sentinel's Belinda Long-Ivey sums up the issue: "It was already 90-something degrees outside, but to be trapped in the greenhouse with fans to circulate the hot air was nothing short of miserable." 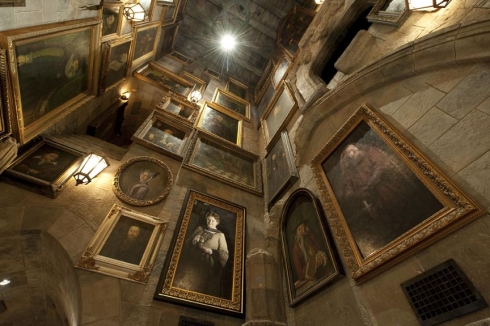 The interior of Hogwarts is lovingly recreated for the Forbidden Journey queue line.Image © Universal Orlando Resort

Despite complaints about the greenhouse area, reviewers loved the Forbidden Journey queue line. But what about the ride itself – does it live up to the expectations generated by the Hogwarts walkthrough? The short answer is an emphatic yes, according to nearly all reviewers.

The unique ride system employed by Universal to take guests on an adventure with Harry Potter is widely viewed as revolutionary. Reviewers have struggled to find ways to describe the system, which utilizes on-rails robotic arms to provide the sensation of flying, and a combination of video projections and real-world sets to tell the story. The Orlando Sentinel's Dewayne Bevil describes it as "a cross between IOA's classic Spider-Man ride, Soarin' at Epcot and even an ultramodern version of Magic Kingdom's Haunted Mansion." Screamscape's Lance Hart is more straightforward, saying simply: "Forbidden Journey is like Spider-Man on Steroids". 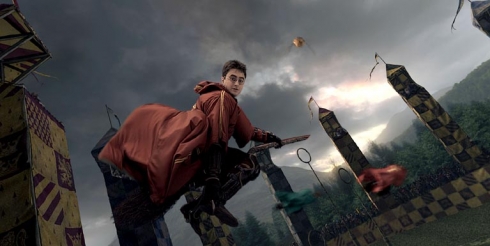 The Forbidden Journey's convoluted plot has come in for some criticism.Image © Universal Orlando Resort

Harry Potter and the Forbidden Journey's plot has left some reviewers a little confused, with a huge amount happening during the ride's 4-minute duration. Inside the Magic's Ricky Brigante (among the first to experience the ride) describes the story as "an impressive whirlwind tour of almost every scene and character you'd expect to show up in a Harry Potter-based adventure". However, in common with other reviewers, he also suggests that Universal could have done more to tie together the various elements seen during the ride: "When it comes to a ride based on a 7-book and soon to be 8-film series, I was simply expecting a more coherent story to carry me through the experience."

A few other minor niggles about Forbidden Journey are mentioned in reviews, including the potential for some riders to experience motion sickness. Most reviewers praise the smooth ride offered by the Kuka robot arms, but several did suffer from queasiness. The Theme Park Guy was among the unfortunate few, saying: "While the ride was packed with well-done animatronics, great effects and surprises, the constant shaking on that no-escape-bench left me feeling motion-sick."

Universal has also become a victim of its own success with the Forbidden Journey, with everyone desperate to ride it. This has led to disappointment for larger riders, some of whom have been unable to join the adventure with Harry Potter due to the ride's size restrictions. While most are understanding of the need to impose limits to ensure safety, some have complained that Universal has so far failed to provide an alternative viewing experience for those unable to ride for any physical reason – something which Disney now commonly does for new attractions. The Disney Blog's John Frost was among the first to raise the issue, saying: "I think Universal is doing a huge disservice to a large segment of their guests here. It would not take too much effort to create a smaller comfortable room with a HD screen and a recreation of the scenes and story that will be experienced in the normal attraction." 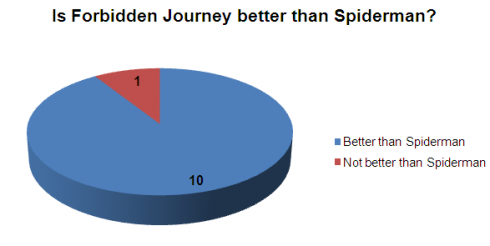 Despite the issues discussed above, reviewers are unanimous in their verdict – Harry Potter and the Forbidden Journey is a stunning achievement for Universal Creative. Many reviewers believe that the company has surpassed its own high-water mark – The Amazing Adventures of Spiderman attraction (located close to the Wizarding World at Islands of Adventure). 10 out of 11 reviewers who make the comparison regard Forbidden Journey as better than Spiderman, with 8 of those going on to describe it as the best theme park attraction in the world. Only The Theme Park Guy disagrees, pointing to the motion sickness issue as the primary reason.

What did reviewers make of the Wizarding World's other two attractions – the rethemed rollercoasters of Dragon Challenge and Flight of the Hippogriff? 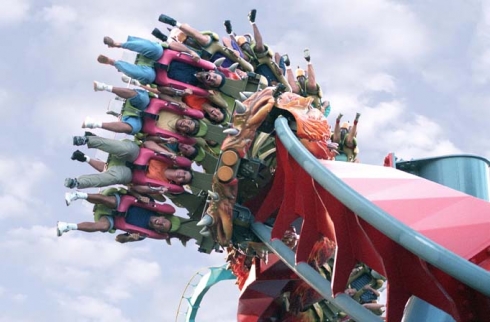 Many riders on Dragon Challenge have already experienced it in its previous guise as Dueling Dragons – one of Islands of Adventure's headline attractions when the park opened in 1999. Featuring dueling inverted coasters built by Bolliger & Mobillard, the ride is well-regarded by coaster fanatics around the world. The coasters themselves have seen only minor cosmetic upgrades, with the previous Fire and Ice trains now known as the Chinese Fireball and the Hungarian Horntail. The queue has seen the biggest changes, with the addition of a new plot based on the Triwizard Tournament as seen in Harry Potter and the Goblet of Fire.

The lack of changes means that Dragon Challenge is still viewed as a great attraction by most reviewers, with azcentral.com describing it as "still one of the best coaster rides in Orlando". Behind the Thrills' Erik, though, suggests that not all Dueling Dragons fans will be happy: "If you've been on the ride before the change, chances are you'll be disappointed. If you haven't you'll be thrilled." 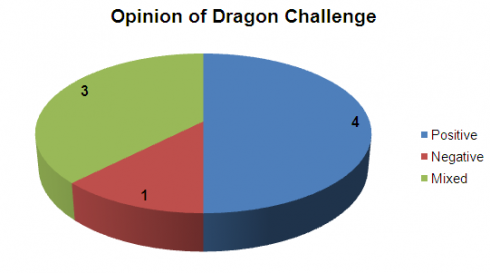 The biggest complaint about Dragon Challenge centers not on the ride itself, but on the queue (which has been closed for some months to allow Universal to update it). David Hernandez describes his disappointment: "Dragon Challenge…is a dismal downgrade from what it was previously. It was amazing to walk past the original stone dragons that marked the entrance to Dueling Dragons. All that we have left now is a wall with a golden egg above it."

Others wonder what Universal was up to during the upgrade period, with Barry Ham bemoaning the "miles of blank stone walls" inside the extensive indoor queue section. Jason Kravison – a major Potter fan – sums up the primary issue when he says "the only thing I didn't like about it was the fact that it didn't have anything to do with Harry Potter".

Surprisingly, given that it was only ever a minor "kiddie" attraction under its previous name The Flying Unicorn, the Wizarding World's other rollercoaster receives more praise from reviewers than the mighty Dragon Challenge. While this may be partially explained by lower expectations for the smaller, shorter coaster, Universal does appear to have expended more effort on "Potterfying" the junior coaster than it did on the major thrill ride. 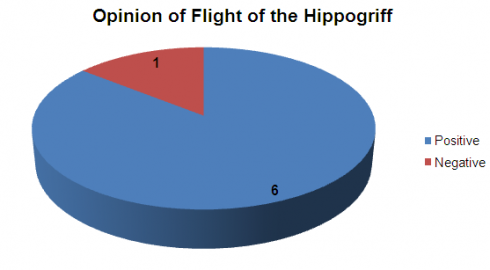 Much of the positive talk around Flight of the Hippogriff focuses on the surrounding theming, rather than the actual coaster. The Tampa Tribune's Kevin Walker praises Universal's recreation of the Hippogriff creature from the Harry Potter books and movies, saying: "The real fun for fans is the Hippogriff itself, which bows to the riders near the beginning of the ride." J.L.C. also lauds the build-up to the coaster saying: "The queue line is just as entertaining with Hagrid's instructions on how to deal with a proud creature like the Hippogriff." 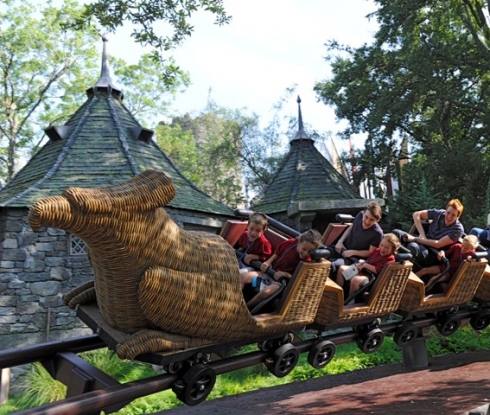 The Vekoma-built rollercoaster itself does receive some plaudits, with J.L.C. describing it as "surprisingly speedy for a 'junior coaster'". Several reviewers point to the ride's location as a major plus point, with Walker claiming that "the view of the castle from the top of the coaster is one of the best in the park".

Not everyone loves Flight of the Hippogriff, with Jason Kravison being disappointed by both the ride experience and the theming: "Honestly, it didn't feel like anything special. The ride carts were designed to look like hippogriffs, and it was very cheesy."

We'd like to thank all of the reviewers who have shared their opinions of the Wizarding World of Harry Potter with online readers. A full listing of the reviews we consulted can be found below.