The Future of Theme Parks: 5 Innovative Ride Concepts for 2020 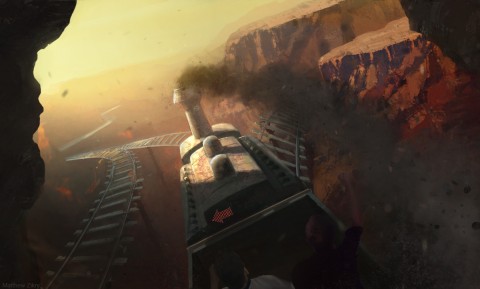 The technology behind theme park rides has consistently evolved at a rapid rate, driven by huge investments from operators such as Disney and Universal and ride manufacturers themselves.

2014 alone will see the debut of Disney's Seven Dwarfs Mine Train, complete with its swinging ride cars, and the Gringotts Bank roller coaster at Universal Studios Florida, which is set to break new ground for a hydrid coaster-dark ride. Lower budget efforts such as Wonder Mountain's Guardian at Canada's Wonderland will also feature innovative elements.

But what about the slightly more distant future - in 5 or 10 years time? What kind of rides can we expect to see then? We don't have a crystal ball, but we do have access to folks who know a thing or two about theme parks. We asked a few experts to contribute their own ideas for rides that could exist within that timeframe, then signed up an outstanding concept artist, Matthew Zikry, to bring them to life. Take a look below, then share your own ride concepts in the comments!

Devised by: This concept was submitted by Joel Bullock, the experienced Coaster Critic. Joel has rated and reviewed dozens of coasters over the years on his excellent blog, although he now plans to retire from the theme park blogging scene. 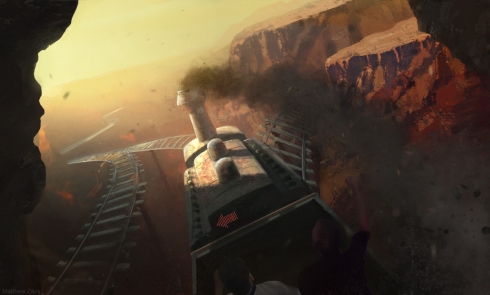 Kodiak Canyon will take interactive roller coasters to a whole new level. We've seen rides like Hollywood, Rip, Ride, Rockit where guests can choose the song that they ride to, but on Kodiak Canyon riders will choose the layout that they'll experience. At two brake runs during the ride, a switch track will redirect the trains if the riders have chosen a different path via the on-board vote buttons. This ground-breaking coaster will offer four different ride experiences, so expect lots of re-rides.

Devised by: This concept was submitted by Nick Weisenberger of Coaster101.com, the author of the excellent Coasters 101: An Engineer's Guide to Roller Coaster Design. It is based on an incredible invention by John Hogg. 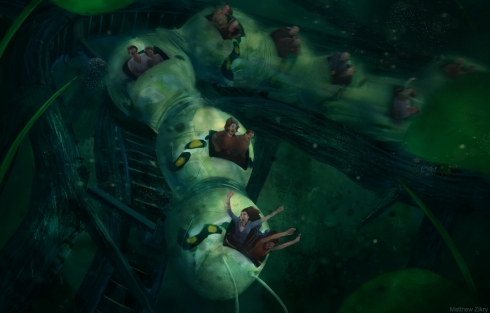 For a future theme park ride, the cantilevered roller coaster (CRC) could revolutionize the industry by taking the thrill ride to the next level of unpredictability and excitement. The CRC system uses two tracks, each with a chassis on it, one above the other. A support arm is mounted to the lower chassis and runs up through a gimbaled, sliding bearing in the upper chassis. The guests ride in the themed portion of the vehicle mounted to the top of the arm above the upper track and chassis.

As the complete vehicle moves along the track course, the upper track and chassis serve as a kind of fulcrum for the support arm. The lower track follows a slightly different course than the upper track, and this causes the top support arm and the guests to swing in a side to side yaw movement, pitching front to back and up and down. Because the vehicle sits on the end of a level the track could be hidden from the riders creating an unpredictable ride experience.

The CRC was conceived as a way to get the ride vehicle up and away from the main track system. It’s similar to those those ride systems that employ a multi-axis simulator sitting on a tracked chassis (e.g. Indiana Jones Adventure, Harry Potter and the Forbidden Journey), but without all the complex hydraulics, servos, and electronics of those systems, plus the ability to move on an undulating coaster track. The CRC could be a simpler and less costly alternative to those highly complex and expensive tracked-simulator rides and thus could pop-up at parks all over the country.

Devised by: Arthur Levine, the experienced travel writer who is the Theme Parks Guide over at About.com.

This attraction would use both actual sets and projected high-definition 3-D media to immerse riders in a story such as The Wizard of Oz. The ride system would be a launched coaster that would be capable of moving through environments at a slower, dark ride-style pace as well as at high-speed, true thrill-ride levels. 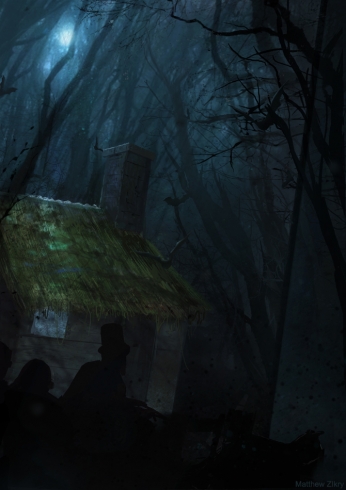 The real breakthrough, however, and the most audacious aspect of the attraction is that it would be a tall coaster, of 175 to 200 feet, with big drops and plenty of airtime (to simulate a tornado, flying monkeys, flying witches, and/or flying/falling hot air balloons), but would be housed inside an enormous building. Think Superdome or Tropicana Field enormous. This would allow a full-size coaster to go through its paces in a controlled environment. It would include multiple, incredibly large screens, perhaps 125 feet high by 300 feet long, past which the coaster trains would rush at high speeds but would still be able to discern the action and feel part of the story. Because it would involve slower, more conventional dark ride sequences as well as high-speed coaster sequences, it would be relatively long, 5-minute experience.

Concept 4: Pirates of the Future

Boat rides such as Disney's Pirates of the Caribbean have proven to be a popular fixture in theme parks, partly due to their very high capacity. However, they have actually evolved very little in that time - they still mainly consist of a series of scenes populated by jerky animatronic characters. This concept will bring them up-to-date with technology that is just starting to be seen in "dry" dark rides today.

"Pirates of the Future" will take guests through a series of scenes depicting a raging battle between the British Navy and a band of pirate outlaws. The pirate ship-themed boats, each of which can hold up to 20 guests in 5 rows of 4, will not navigate via a fixed path, but will instead travel across an open "ocean", with their positions being controlled by a local positioning system. 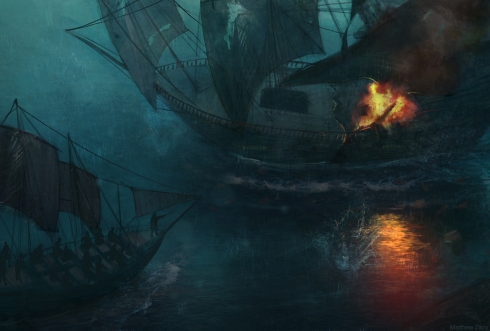 Interactive sections will see guests operating a "cannon" on their boat, which will trigger explosions in the scenes in front of them (with the location of the explosion changing depending on the guests' aim). The boats themselves will feature an inner section that can tilt at key moments to simulate the impact of enemy fire and the rocking of waves.

Rather than animatronics, the scenes will be made up of a mixture of physical sets and 3-D, life-sized moving holograms. The combination of this, the interactive cannons and the local positioning system will enable every ride to be different. A number of different scenarios will be selected from at random, with guests' aim also having an impact (for example, they may fail to sink an enemy ship at a key moment).

Devised by: This concept was put forward by Brian Krosnick, one of Theme Park Tourist's experienced writers.

How could flat rides change in the future? Flat rides already come in every size and shape. From the gentlest carousels to the most dizzying tilt-a-whirls; high tech top spins to gleeful yo-yo swings (and their towering new-age siblings). 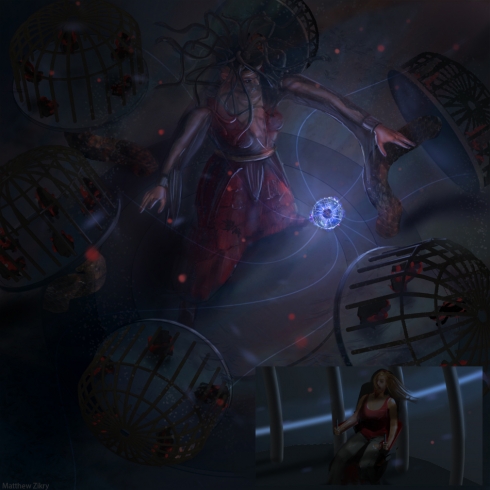 Imagine now a new breed of flat rides, catering specifically to you. Heart rate monitors, audio input, and individual touch-screens could design your premium experience in mere seconds. Select an intensity level and grab onto the heart rate bar in front of your seat. Through the ride, it will measure your body’s response to flips, spins, and twirls and re-evaluate its path in real time to get your blood pumping (unless, of course, you prefer to keep a nice resting rate)! Measuring audio, words like “stop” could calm the cycle in your individual car; conversely, a few too many seconds of silence could urge the ride to do something to earn a laugh or a scream.

Connect this concept to RFID bracelets and the ride could track your preferences and even present one or two post-ride questions on its touch screen as you wait to disembark, storing all its findings for your next visit to any other equipped ride. Retaining their massive range of styles, shapes, and sizes, flat rides of the future could be universally united and yet individually tailored. With your personal amusement information stored securely in the cloud, you could have increasingly perfect experiences on the great-great grandchildren of today’s carnival classics.

What do you think the future of theme park rides will look like? Share your own concepts in the comments below!

Thanks to Matthew Zikry for the artwork. Don't forget to check out his portfolio.

Just come back from Disney Paris and the rides there were awesome. Ratatouille was such an innovative idea... my only problem with the modern rides is the use of 3D glasses. Some people get EXTREMELY motion sick when immersed in a 3D environment when paired with erratic movement. Other than that, the new ideas are amazing!

Honestly this is the most mind blowing thing I've read especially the Wizard of Oz one. I've always thought of doing a coaster like Battlestar Galagtica and thought of what if it's Superman vs Doomsday?