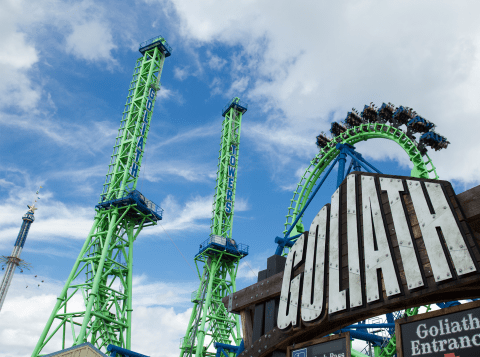 Just over a month ago, at Disney’s Animal Kingdom in Walt Disney World, demolition began on Primeval Whirl after it was announced it would be permanently closed last year. The small coaster in Dinoland USA did not reopen following the pandemic and continues to be slowly deconstructed. In honor of this defunct Disney coaster, we are going to look at 4 other coasters across the United States that also met their demise in 2021.

The first coaster we are saying goodbye to is Wicked Twister. Wicked Twister was located at Cedar Point in Sandusky, OH. This double-twisting impulse coaster opened in May of 2002. At its time of opening, the coaster was the tallest and fastest inverted coaster in the world. Its two twisted towers stood at 215 feet and riders would reach a speed of 72 mph. After being launched forward up the first tower, riders would plummet backward, back through the station, and up the back tower. Next, riders would zoom back up the front tower, backward up the back tower again, and up the front tower a third and final time. Over its 20 seasons in operation, Wicked Twister had over 16 million riders. The ride closed on September 6th, 2021.

The next coaster to meet its demise was Cheetah. Cheetah was located at Wild Adventures in Valdosta, GA.  Cheetah was a wooden coaster that opened in 2001. It boasted a 95 ft drop. Much like Primeval Whirl at Animal Kingdom, Cheetah closed due to the pandemic and never reopened. It was announced earlier this year that the ride would remain permanently closed.

DeJavu from Six Flags Great America is now operating at Silverwood Park under the name of Aftershock.

But that is only 2 coasters, not 4 like article says. So where are the other 2?

You just need to click on the second page to see the other two.