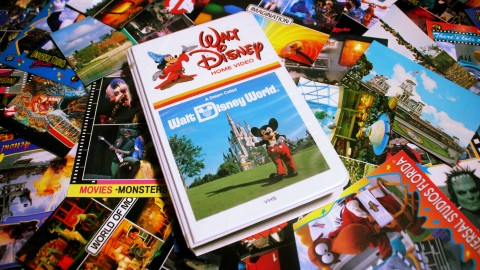 If you search “runaway railway” on YouTube right now, 18 of the first 25 results are full ride-throughs of the Hollywood Studios attraction. Ten of those 18 videos are in 4K, a resolution twice as crisp as most consumer TVs. One of them was shot with a 360-degree camera so you can even get a good look at the ceiling if you’re into that sort of thing.

The Disney Parks don’t bother much with physical media anymore - the annual planning videos they used to mail out now stream directly from DisneyPlanning.com - and they don’t have to. Now that you, me, and the Petersons from Paducah are walking around with cameras that can record the ceiling of It’s A Small World in HD on accident, there’s no reason for Disney to keep paying the postage.

But in 1980, still three years away from Sony releasing the first consumer camcorder, Walt Disney World media was a little tougher to come by. Eight-millimeter film offered seven or so minutes of memories, minus sound. Disney picked up the slack in the late ‘70s with souvenir reels in Super 8, complete with newsreel narration and an organ score fit for a funeral home.

At the same time, the Victor Company of Japan introduced a new media format that would beat out its competition, usher in the home video industry, and remain in production until 2016. The Video Home System was here to stay, and A Dream Called Walt Disney World would be the Florida Project’s first ever VHS tape.

Today, you can walk into any given thrift store and buy VHS tapes two for a dollar. VCRs will take up no less than an entire load-bearing wall. Any of them can be yours for the price of a fast food value meal. By the dawn of the 1980s, blank tapes cost about $25, just over $70 today. Even if you settled for a middle-of-the-road Sears model VCR, it would set you back $1389.88 before taxes. That’s almost $4,000 today, or about 12 of those 4K TVs most people don’t have in their living rooms yet. The prices would fall across the board in the following years, but in '80 or '81 - the video lists one year and the case lists another - a VHS tape from Walt Disney World wasn’t just a souvenir, it was a showpiece.

When the Petersons got back to Paducah, they’d tell the neighbors all about Walt Disney World. If anyone took the bait, they had a rewindable opportunity to show off both their magical vacation and their tastefully wood-paneled VCR. A Dream Called Walt Disney World was a 25-minute commercial, as much for its medium as its source material.

Enduring this crash course in Video Home System history is my scenic route to saying A Dream Called Walt Disney World is weird.

If the promise of theme park home video coverage enticed you enough to click on this, you’re probably familiar with the ‘90s planning videos that most kids ritually sacrificed to their VCR. Those have a distinct rhythm, structure, and language. By the ‘90s, everybody with a TV had a working knowledge of Walt Disney World. Where it was. What it had. Whether or not they could afford it.

This is a different animal. The Magic Kingdom was only ten. It was shy a mountain. The Jungle Cruise skippers still packed heat. Even the footage of Walt himself feels different. He tells the familiar story of founding Disneyland to play with his daughters and later points to the wall-sized map of his beloved ‘Florida Project.’ But there’s little mythology here. Sure, his name is on the clamshell case no fewer than nine times, but the deification and reinterpretation of his every last quote is still decades away. Even if you clock it from 1981, the footage from his press conference was only 16 years removed. For reference, that would be like the 2020 planning video including footage from The Incredibles. Doesn’t seem so long ago, does it?

A Dream Called Walt Disney World presents a resort in quiet peril. The 1979 energy crisis flattened attendance, despite the retirement of pay-as-you-ride ticket books in favor of a $9.50 all-in-one admission fee. EPCOT Center, still a hard-hat zone with a year to go, isn’t mentioned. Soon after it opened, a Goldman Sachs analyst would condemn it as “a one-shot, upward blip for Disney’s earnings.” Corporate raiders weren’t far behind. None of this panic seeps through the tape - there’s a montage dedicated entirely to ice cream - but considering how much this angles the resort as a world away from everyday troubles, it’s worth remembering.

Fair warning: some copies start with the Sorcerer Mickey bumper for Walt Disney Home Video that YouTube comments tell me traumatized a lot of unsuspecting children.

If you can make it past the Mouse, there’s an ominous narrative opening to A Dream Called Walt Disney World. A little girl cautiously wanders the postcard greenery in front of Cinderella Castle. It’s shot low and imposing.  “If you’ve ever had a dream and had that dream come true,” coaxes narrator Dick Tufeld, no less than the voice of Lost in Space’s iconic robot, “then you know a little something about the magic of Walt Disney World.” The girl opens the gates, sees her big-headed cartoon friends, and smiles all her fears away. Then the band wakes up with music that sounds stunningly similar to Ralph Burns’s Wally World fanfare from National Lampoon’s Vacation and the singing starts.

Loved this article. Still have the VHS and love watching this on YouTube from time to time.

This one was enjoyable... but Epcot Center: a souvenir program was the one I watched over and over. Filmed before horizons opened, but they teased it... and I think it’s this video that made me love Horizons more than the ride itself.

If I keep covering these tapes, that's one I'm itching to dig into. The Experimental Prototype Community Of Tomorrow still at its most experimental.