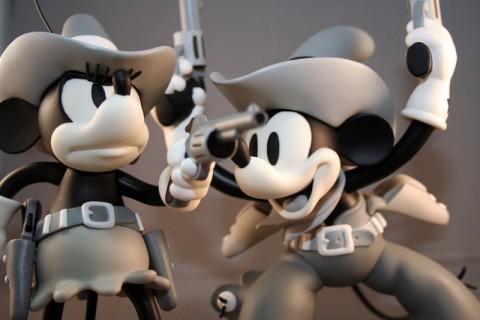 Disney enforces a wide range of rules at its theme parks, from restrictions on what guests can bring in with them to behaviors that are likely to get you ejected. Most of them are fairly obvious, and apply at many other theme park chains, too – but some are a little unexpected, and guests do occasionally fall foul of them.

We think it’s unlikely that many Theme Park Tourist readers will need educating about what they can and can’t do on Disney property. But we still thought it might be fun to round up a list of things that Mickey frowns upon… 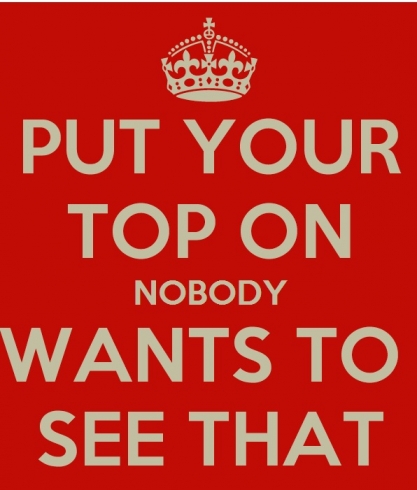 It can get really hot at Disney theme parks, especially those in Florida and California. It doesn’t help that you’re probably racing in an excited state from one attraction to another.

Take your top off to cool down, though, and you’re likely to be immediately approached by a Cast Member and asked to put it back on. Refuse, and you’ll be asked to leave.

The same applies to shoes – Disney wants you to wear them at all times. The exception, of course, is at Walt Disney World’s two water parks, Typhoon Lagoon and Blizzard Beach.

19. Shoot video on a roller coaster 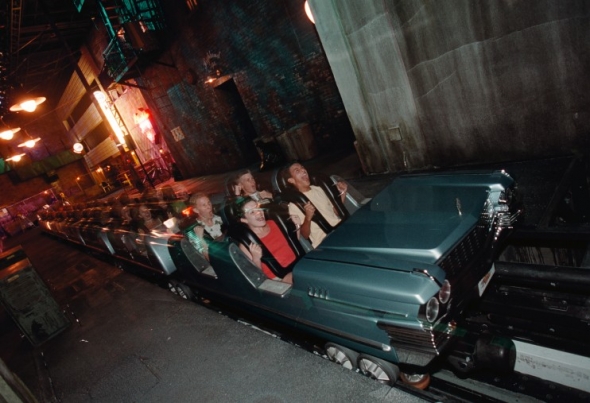 Carrying loose objects onto a roller coaster is a very bad idea. If you drop them, they could strike a fellow rider (or you) at high speed, with devastating results. That’s one reason why Disney forbids video recording on rides such as Rock ‘n’ Roller Coaster and Space Mountain.

You’ll also get into trouble for filming during attractions that feature a lot of copyrighted material, such as Star Tours: The Adventures Continue. You’re unlikely to have a problem capturing footage of your ride on It’s a Small World, however, despite it technically being against the rules.

18. Swear at another guest or Cast Member 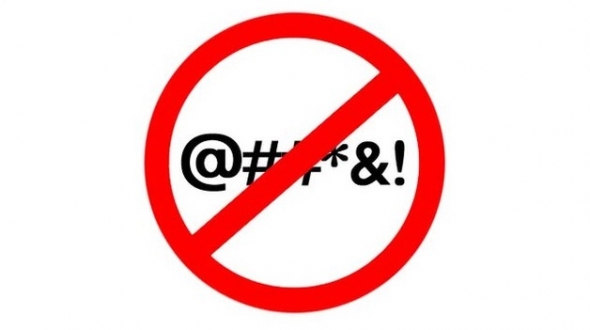 There are plenty of reasons to get frustrated at Disney parks, such as rides breaking down or other guests cutting in line. Keep your cool, though – if you get abusive with other guests or Cast Members, you’re likely to be removed from the park. 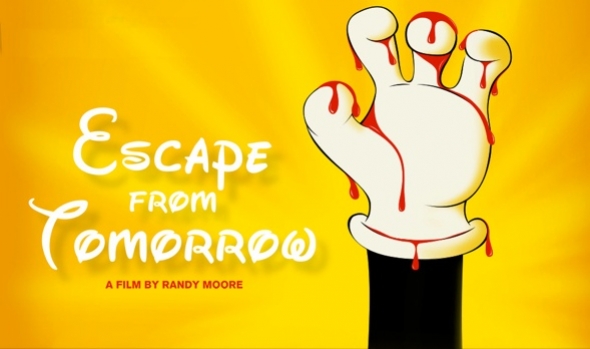 “Videotaping, recording of any kind, broadcast or transmission for commercial purposes” is forbidden at Disney parks. In reality, this isn’t strictly enforced – if you run a theme park website like ours, for example, it’s unlikely that anyone will stop you from filming footage of a new ride, despite it technically being for commercial purposes.

Try and bring in a full-scale film crew, though, and you’ll soon be stopped. That’s why the few non-Disney movies that have been shot at the parks have been filmed largely undercover using amateur equipment.

It’s not just video recording that’s discouraged on indoor rides. Flash photography can be very annoying to other guests, particularly on atmospheric attractions such as Pirates of the Caribbean.

In our experience, this is one of the rules that is most frequently broken by guests at every Disney resort. 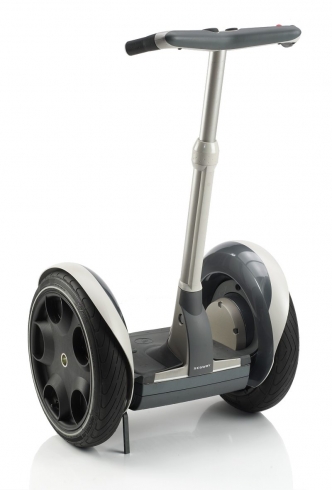 Disney explicitly bans "wheeled mobility devices with less than 3 wheels and devices that cannot maintain stability and balance when stopped, unpowered or unoccupied" from its parks. The aim is clear - the company does not want Segways rolling up Main Street, USA.

One woman with muscular dystrophy challenged Disney's ban in court, but a California judge ruled against her. Among the evidence that Disney submitted? That "in 2010, the owner of the company that makes Segways, died when he apparently lost control of his Segway."

14. Ride a skateboard or rollerskate

Thinking of saving on shoe leather and beating the crowds by skating around Disneyland? Think again. The park, along with all other Disney parks, bans skateboards, rollerskates, rollerblades and just about anything else on wheels (with the exception of strollers and wheelchairs). 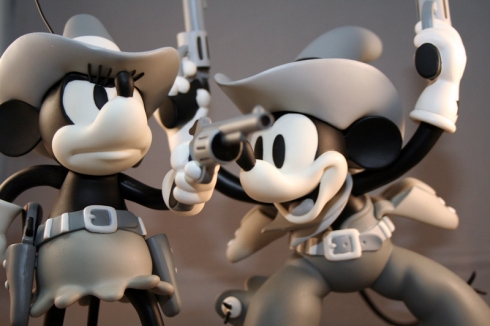 You may want to defend yourself from Darth Vader, Maleficent or some of the other scarier characters at Disney’s parks – but you’ll have to do so in a non-violent way. Since September 11, Disney has protected its parks with extensive bag searches, and bringing in a knife of any kind (or even worse, a gun) is really not a good idea. 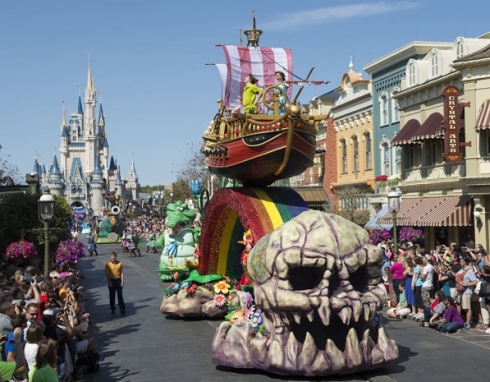 Waiting to watch one of Disney's parades can be a brutal affair. Families gather an hour or more in advance, lining the pavements of Main Street, USA and waiting in the beating sun for Mickey and his friends to come past.

Wouldn't it be lovely to have a folding chair with you to make that wait more bearable? Tough luck - they aren't allowed. Probably understandably, given the amount of precious room they would take up.

11. Drink your own alcohol 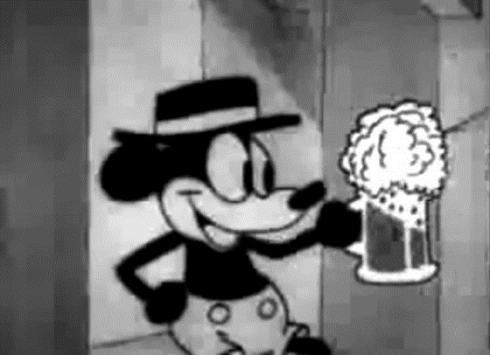 Disney may have relaxed its alcohol ban at its theme parks over the years, but that doesn’t mean it’s going to allow you to bring your own in.

Glass containers are also banned, with the exception of baby food jars.

Some of these rules are simply untrue.

You CAN shoot video on rollercoasters at Disneyland, you just cannot use a selfie stick.

You CAN wear a costume to the park as long as it's not a Disney character, and is more or less grown-up in nature. Look at Dapper Days. I have gone dressed as Indiana Jones.

You CAN shoot a movie, it just cannot be offensive or dangerous, or involve elaborate camera setups and lighting. There are MANY bloggers who shoot their web videos at Disneyland all the time, even doing documentary blogs.

(Here's just one clip I shot with the help of the Haunted Mansion CM's who allowed me to set up in a roped-off area and eve do rehearsals.)

As to offensive clothing, I have seen women and men wearing the flimsiest of spandex bike shorts in warm weather, that leave NOTHING to the imagination. Nobody stopped them.

So, these rules are not exactly correct, in some cases.

I'm a little surprised and confused about not being allowed to record videos on rides. How did all those people on YouTube get away with it?

This rule is often broken. Many theme parks have this rule, yet someone always seems to get away with it.

i see line jumping all the time. which is not fair at all, if i have to wait in line, i think the other people should to! i see it at thunder mountain snow white and splash mountain. you tell cast members and they do nothing.
cedar point they catch you, or they hear complaits they kick you out and banish you. maybe disney should look into tougher rules

If you are an adult and want to "dress up" try Disneybounding Pinterest was a lot of examples.