The 5 Strangest Theme Park Rides Based on Movies 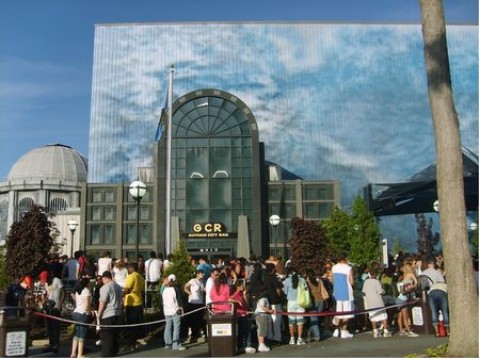 There are literally hundreds of theme park rides based on movies, with tie-ins with studios being a standard commercial arrangement. Many of these are an obvious fit - high-speed roller coasters based around superheroes, "kiddie" rides inspired by cartoon characters and "4D" attractions featuring updated footage from the movies themselves.

Sometimes, though, things can get a little weird. Occasionally, a deal will be cut with a studio at the last minute, forcing a ride's designers to shoehorn an ill-fitting theme onto a ride for which it was never intended. Or, an attraction's creators might simply go in a direction that few of us would ever have expected. Here, we celebrate some of those quirky decisions, with a list of the 5 strangest rides based on movies.

There was nothing inherently wrong with the three Italian Job: Stunt Track coasters spread across North America (at Paramount’s Kings Island, Canada’s Wonderland, and Kings Dominion). Even with a diminutive 31-foot drop and a speedometer maxing out at 40 miles per hour, the attraction always lived up to its initial marketing as an evolution of the family coaster, meant to replace classic mine trains with special-effects laden, launched rides suitable for the whole family...

During Cedar Fair’s purchase of the Paramount Parks however, the coasters were stripped of their special effects (losing on-ride audio, a fountain-based splashdown, flame effects from a shooting helicopter and spraying water) and the once-detailed trains meant to resemble ¾ scale Mini Coopers from the film’s climactic finale took a ride through the strip shop, losing hubcaps, windshields, decals, headlights, and even working doors. Canada's Wonderland’s incarnation doesn’t even bother to stop at the famous mid-course brake under hale of helicopter fire and exploding gas canisters, since every single effect in the scene has been shuttered. Still, anyone who’s seen the Paramount film will recognize the oddly shaped cars and the outdoor “dark ride” portions of the coaster that reenact the movie’s finale scene by scene.

4. It’s Tough to be a Bug (Disney California Adventure and Disney's Animal Kingdom)

Despite smiling audience members in promotional art, "It's Tough to be a Bug" is an intense and frightening attraction based on a G-rated movie. Image © Disney.

This odd prequel to the 1998 Pixar film sees humans shrunk down to the size of a bug to experience a grand, insect-led variety show (located either in a tree trunk or an ant hill depending upon whether you see it at Disney’s Animal Kingdom or Disney California Adventure). It begins as a self-aware nod to its theme park attraction status by showcasing short vignettes of insects determined to show how tough it is to survive. A termite shows off his poison saliva (via water blasts) and a stinkbug shows his own defense mechanism (via in-house special effects we’d rather not discuss) among others.

But when the film’s antagonist Hopper appears via a startling, all-too-real animatronic figure of the menacing grasshopper, the theater is plunged into fog-infested, screaming darkness. Black widows rappel from the ceiling, mere feet above viewers’ heads as they gnash fangs and reach with spindly legs. Green-glowing insecticide clouds descend on the audience. Hornets attack from behind as real pneumatic spikes jab into viewer’s backs. It’s chaos, and screaming, crying children are the norm. Of course, it’s all wrapped up with a heart-warming show tune and some final, friendly effects, but the sign out front warning visitors of the dark nature of the show is unsettling given its G-rated source material. 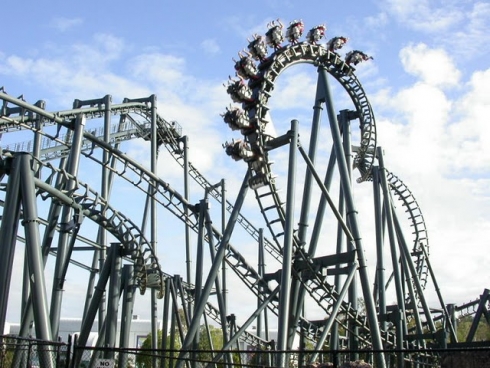 A standard Vekoma SLC was themed to gritty 1980's cop film Lethal Weapon despite a 1995 opening. Maybe Warner Bros. ran out of film franchises to base rides on?

Almost certainly based on the B&M inverted coasters across North America that bore the “Top Gun: The Jet Coaster” moniker, this also-suspended coaster (but of the much more infamous Vekoma SLC variety) at Australia’s Warner Bros. Movie World took the gritty 1980’s action-coaster theme in a different direction. Especially opening nearly ten years after the film’s debut, Lethal Weapon seemed an odd choice of intellectual property for a gleaming new coaster. The queue for the ride originally passed through a recreation of Chinatown and a dilapidated junkyard set, but was rerouted in 2011 to bypass that themeing almost entirely.

The queue switch was the precursor to a full retheme for the ride, now known as Arkham Asylum - Shock Therapy. Still, Lethal Weapon – The Ride will be remembered as a strange choice of intellectual property for a roller coaster, and a pretty painful experience to advertise an old film.

Splash Mountain retells the infamous fables of Song of the South without most visitors realizing it. The climactic dive into the briar patch is an important plot element. © Disney.

A surprising amount of visitors to Walt Disney World and Disneyland don’t even realize that Splash Mountain is based on a movie. And indeed, Brer Rabbit and the fanciful vaguely-Southern settings and characters of the attraction seem like originals. But the attraction is all derived from the 1946 Disney film, Song of the South wherein an African American man named Uncle Remus tells tales of the mischievous rabbit and his ne’er-do-well enemies, Brer Fox and Brer Bear.

In one of those short tales, Brer Fox finally captures the wily Brer Rabbit by trapping him in a murky, sticky blob of black goop (called a "tar baby" in the film and replaced with a bee’s nest in the ride). The clever rabbit then uses reverse psychology to trick his captor into throwing him into the prickly briar patch below, which is actually Brer Rabbit’s home (which also forms the climactic final drop of the log flume ride).

But due to politically incorrect undertones and an unclear time frame within or after the American Civil War and the freeing of slaves, the original film can be hard to track down on VHS or DVD. It’s often heralded as a fantastic work of art (using the live actors interacting with animated characters technique furthered in Who Framed Roger Rabbit) and the Disney Company occasionally mentions in passing that they’re looking for an appropriate way to release it. For now, though, it seems that Splash Mountain will continue to be a multi-million dollar ride based off of an film that’s been largely unseen since the 1940s. 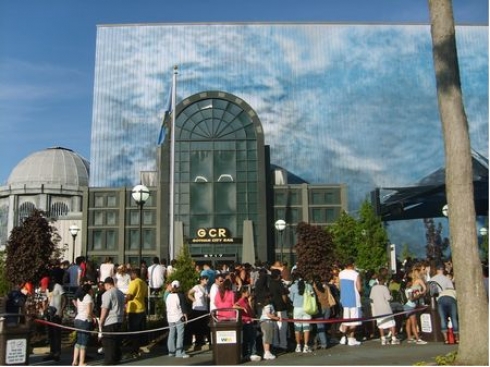 In the summer of 2008, Christopher Nolan’s The Dark Knight succeeded at blowing away audience and critical expectations and winning tremendous box office numbers that shattered records. It was a gritty, real, reimagined take on the Batman franchise that had been rebooted years before with Batman Begins. So when Six Flags announced that they’d use their famous DC Superhero tie-ins to construct a roller coaster based on the darkly adventurous film, the excitement was palpable. Especially following the chain’s world-famous B&M inverted coasters themed to the cloaked superhero, it seemed they’d find a winning combination in the darker telling of the story.

Beginning in 2008, three Dark Knight Coasters opened at Great Adventure, Great America, and Six Flags Mexico. Instead of a white-knuckle thrill ride, visitors found the sinister, adult-oriented, violent film had been reduced to an indoor Wild Mouse, a roller coaster typically saved for carnivals. The distinctly family-sized coaster maxes out at 30 miles per hour as it passes strobe-lit scenes of unanimated Batman figures along its traditional sharp-turned layout. As expected, the pre-show and theming that established the story has been all but discontinued at all three locations, leaving a “Wild Mouse in a box.” Stranger still, Six Flags Great America already had an almost identical Wild Mouse style coaster (albeit, from manufacturer Zamperla and not Mack) located just a few steps away.

What are your favorite theme park rides based on movies? Which do you find the oddest? Let us know through the comments section below!

The Warner Bros Movie World parks in Germany had a weird ride based on Gremlins that was also a studio tour, and it ended with a cameo from Alf. And there was a Neverending Story ride, an SLC named for the film Eraser, and a Police Academy show, so I guess it was in good company.

Song of the South is rare due to the fact that it has not been released in a looooong time. Any non-Disney fanatic will know very little about this story, especially young kids that visit the park today. If it wouldn't be for me being a Disney fanatic, I wouldn't have ever tried to track the movie down and get a digital copy of it. I would say that Jurassic Park River Adventure should be here somewhere.... In the films, there was never a river adventure, so I think that they should have found a way to do the jeep design instead. You could have linked a couple of jeeps together to make it possible to have enough seats. The current boats sit up to 20 passengers, so Universal could have linked 2-3 jeeps with three rows each and sat 2-3 across if constructed the right way.

Actually,I had Song of the south on Video so its not rare at all

i think that saw: the ride at thorpe park has awsome theming plus i also think that charlie and the chocolate factory ride at alton towers is very very good especially at the end in the glass lift